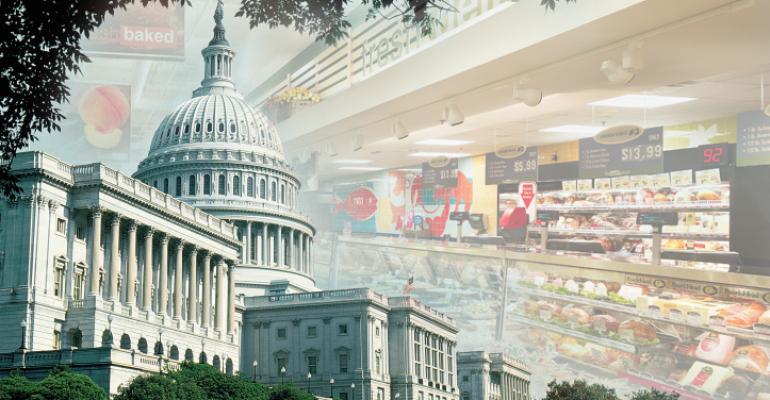 &ldquo;In the future, when we talk with members of Congress, we can relate the impact of any proposed legislation very specifically to sales, jobs, wages and taxes in our industry.&quot; &mdash; Peter Larkin, president and CEO, NGA

LAS VEGAS — The National Grocers Association believes it is on the verge of having hard evidence to back its long-held contention that the independent grocery channel is a vital and thriving part of the nation’s economy, Peter Larkin, president and chief executive officer, told SN on the eve of NGA’s 30th annual convention here.

In remarks scheduled to be delivered at the opening session, Larkin said he planned to discuss the goals and update the status of an extensive research project that quantifies the economic impact of the independent grocery sector on the food distribution system and the U.S. economy.

“When people have asked in the past how big the independent grocery channel is in the U.S. and what economic impact it has, there was no accurate data available to answer that question,” Larkin explained.

Last September NGA commissioned a major study by New York-based John Dunham and Associates to quantify the impact of independents on the nation’s retail sales; the number of jobs created, plus salaries and benefits; the amount of taxes paid; the value of goods and services procured; and the value of capital invested.

“The research provides an opportunity for the independents to have their story told collectively,” Larkin said. “Each company has a lot of public awareness and recognition within the communities it serves, but this data will benefit all members as a group.”

Larkin said he plans to share some of the study’s findings when they become available later this month,  after which all the data will be posted permanently on the association’s website — with updates likely every couple of years. Users will able to access the statistical information that’s been quantified at the national level, by state and by congressional district within each state, he noted.

“This is a living resource that we anticipate will drive traffic to our website and increase awareness of the association and who we are,” Larkin explained.

“In the future, when we talk with members of Congress, we can relate the impact of any proposed legislation very specifically to sales, jobs, wages and taxes in our industry,” he said.

“We’ll also be able to use the data to communicate the size of our industry to the CPG companies — to make sure they understand how large and important the independent sector is and to put our role in context with that of the large public chains.

“Also, when we talk to the media, this information will allow us to tighten down on our role, with numbers that truly reflect the strength and importance of the independent segment.”

In setting parameters for the study, NGA defined an independent as an operator doing between $2 million in sales a year at the low end and $5 billion annually at the top, “which deliberately excluded some of the largest privately owned independents, whose results would have skewed the numbers,” Larkin explained.

The study also encompasses sales at all cooperative and voluntary wholesalers, though their sales to public chains have been excluded, he added.

The study is one result of the Member Value Project that NGA introduced last year as it sought member input to determine the association’s strengths and weaknesses, Larkin pointed out.

“It’s one of many things we are doing to provide more value to our members,” he explained.

Other MVP results over the past year include the following, Larkin said:

• Making more than 80 training and education courses available online in both English and Spanish. In addition, NGA formed a new partnership earlier this year with First Data Corp., Atlanta, that will supplement the cost of the courses and reduce the price to members by up to 80%.

• Extending the Executive Leadership Development Program, available for the past 10 years exclusively at Cornell University in Syracuse, N.Y., to the West Coast, at the University of Southern California in Los Angeles. The Cornell program was scheduled to offer a complimentary half-day refresher class yesterday for alumni registered for the NGA Show.

• Offering webinars on a variety of subjects, including health care, labor issues and taxes, “to which members have been responding quite well.”

• Making resources available to help members assess their technology needs and providing affordable access to technology solutions, including a data aggregation program that provides members with a larger base of information.

• Working with the Center for Advancing Retail & Technology, Syracuse, N.Y., to match companies that want to conduct specific market-level testing with retailers willing to participate.

• Streamlining communications with members to provide information most efficiently.

According to Larkin, independents are recovering well from the economic stress of the last few years. “Those economic challenges have certainly had an impact, but like other recessions, they have helped the strong operators get stronger and given them the opportunity to focus on their core strengths.

“So I feel confident about the future of the independent grocery sector, and I believe our members are well-positioned for growth in the future.”

For the third consecutive year, this year’s NGA Show is being held at the Mirage Hotel in Las Vegas. “Our staff and theirs work very well together,” Larkin noted, adding NGA has one more year on its contract with the hotel.

“But we plan to grow the show, and we’re getting to the point that we have to begin looking at other, larger venues,” he added.

Attendance, which was at a decade-high 2,400 last year, is expected to approach 2,700 this year, Larkin said.

All floor space at the show is sold out, with 196 exhibitors, “and over 50 more companies on a waiting list,” he noted.

One major change at this year’s show, he said, will involve operating the exhibit floor this afternoon and Tuesday morning instead of only in the afternoons, as has been traditional. “We felt we could drive more traffic on the second day by moving the exhibit to the morning,” Larkin explained.

The convention’s workshop sessions will be held this morning and tomorrow afternoon, “and those are always popular and well-attended, so we don’t think moving them from Tuesday morning to Tuesday afternoon will make a difference,” he said.

In addition to NGA exhibits, the show floor will also feature booths for MEATXPO, the annual show of the North American Meat Association — the same group, under its former name, the National Meat Association, that co-located with NGA two years ago.

The convention will also feature exhibits from the Produce Marketing Association, which hosted a large pavilion at last year’s show and will occupy one-third more space this year for a larger exhibit, Larkin said.

A new event at this year’s convention will be a “5-K fun run and walk” tomorrow morning sponsored by the Women Grocers of America — designed to raise funds for WGA’s scholarship effort and other programs, Larkin said.