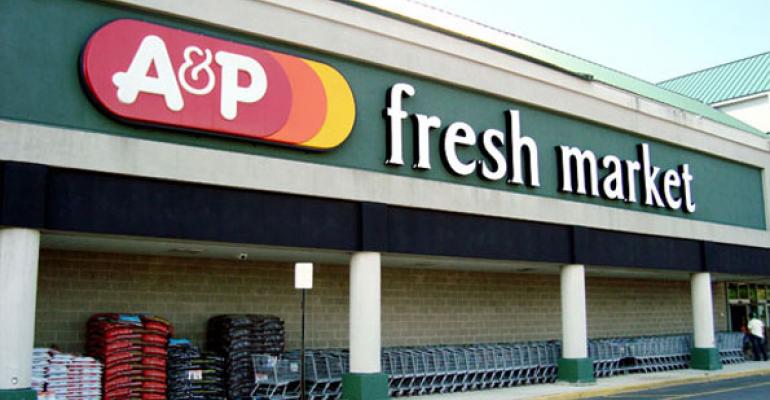 MONTVALE, N.J. — A 15-month stay under federal bankruptcy protection ended last week for A&P, which will continue as a private company with lower costs, a cleaner balance sheet and 75 fewer stores than it had going in.

“In just over one year, we have completed a thorough restructuring of A&P’s cost structure and balance sheet to build a strong foundation for the company’s future,” Sam Martin, A&P’s president and chief executive officer, said in a statement. “With the full support of our financial partners, the new A&P is committed to delivering exceptional value and an enhanced in-store experience to all of our customers across our more than 300 stores.”

Concurrent with its emergence from bankruptcy, Frederic “Jake” Brace, the company’s chief restructuring officer and chief financial officer, resigned from the company. Raymond Silcock, who joined A&P in December as head of finance, succeeds Brace as CFO.

A&P’s restructuring included the sale or closure of more than 70 stores, including its entire fleet in the Baltimore-Washington region, leaving the company with a core of 320 stores in the Philadelphia and New York metro areas doing business under the A&P, Waldbuams, SuperFresh, Pathmark, Food Emporium and Food Basics banners. The company also rejected dozens of leases for closed stores, struck new supply and distribution agreements, and renegotiated labor contracts with thousands of union workers, attacking the so-called “legacy costs” that along with a heavy debt load and struggling stores, pushed the company to financial ruin by 2010.

A&P can now turn its attention more fully to its stores which in recent months have begun campaigns touting an operational turnaround known as “Changing for the Better” or “Makin’ It Better.” The company in court papers said it anticipated spending nearly $400 million on store renovations over the next four years and could grow same-stores by 2.2% in the 2012 fiscal year, which began in late February.

“I want to personally thank Jake Brace for his significant contributions to the company,” Martin said. “Jake has played a central role in helping guide the company through the Chapter 11 process, advance our turnaround and successfully transform A&P into a much stronger company.”