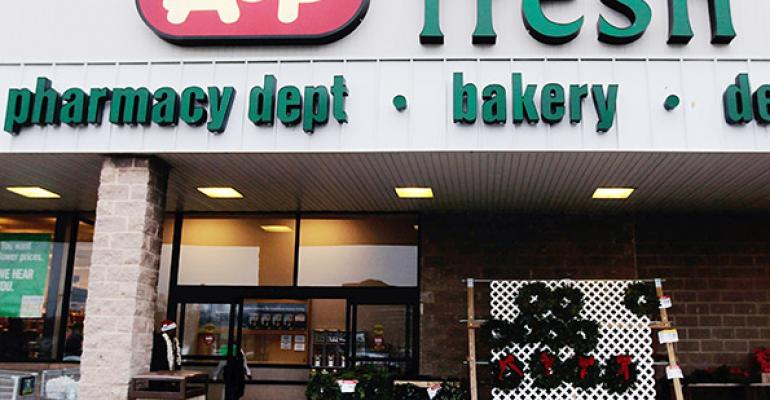 With the sale of 95 stores to Acme and Stop & Shop out of the way and 25 stores closing, A&P is now turning its attention to the disposal of the remainder of the chain — a process that could shape into an "everything must go" sale.

That group, consisting of approximately 180 locations — has received 128 separate bids, officials of the retailer said earlier this week. The auction is set to take place Oct. 1 and 2 in New York.

Additional stores — including the 17 bid on as a “stalking horse” by Key Food Stores Co-operative and a Mount Kisco, N.Y., store pulled from the Stop & Shop bid when a higher offer arrived  — are also to be sold at auction.

A&P has not revealed the identities of the bidders, although sources told SN that interested buyers include area grocery operators, including union-represented chains that could preserve jobs for existing A&P employees. “There will undoubtedly be other supermarket bidders,” one source, who asked not to be identified, told SN. “But some will just be tire-kickers.”

The source added that officials running the auction “were doing almost anything they could to get people into the auction, even if their bid amounts were crazily low.”

Sources maintain that A&P, despite its struggles to operate profitably, has an “unduplicable” real estate portfolio and sites that could provide a cost-efficient route to expansion in mature and densely populated Northeast markets.

“You don’t want to throw up your hands and give up yet,” John T. Niccolai, president of New Jersey-based Local 464A of the United Food and Commercial Workers, told SN. “In today’s economy the cost of building out a store between the permits and approvals and materials will cost you $7, $8 or $10 million. If you can pick up a few for a couple million, you’re way ahead of the game.”

Niccolai said he expects retailers like Key Food, Foodtown and Kings to be among the bidders. Many expect Wakefern Food Corp. and its independent cooperative members would eventually make a play for some sites. Wakefern has not commented.

Earlier this week, the judge in A&P’s bankruptcy case approved the sale of 24 stores to Ahold’s Stop & Shop and 71 stores to Albertsons’ Acme banner for a total price of $373 million — an average of around $3.9 million a store.

Niccolai said he anticipates that those stores will convert to their new banners rapidly, with new owners in place by the end of October.