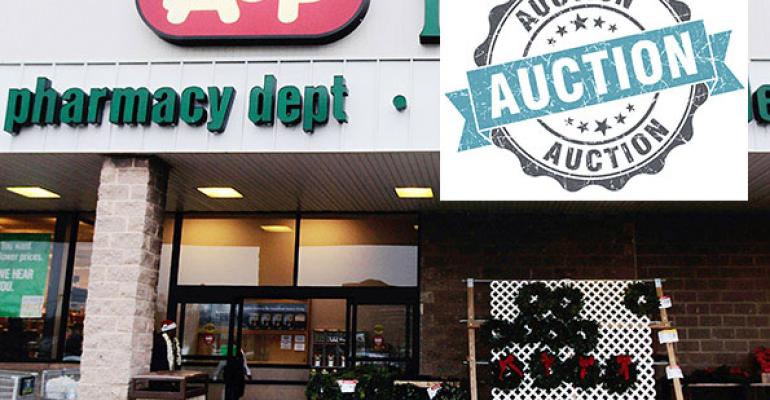 More than 100 bidders making 300 offers for A&P-owned stores are expected to participate in a court-led bankruptcy auction of the retailer's stores Thursday and Friday in New York.

On Thursday, the Montvale, N.J.-based retailer will auction its highest-volume store in Mount Kisco, N.Y., as well as its stores in the five boroughs of New York, Westchester County, N.Y., and Northern New Jersey. The Mount Kisco store was originally included in a package of stores that earlier this month was sold to Stop & Shop, but A&P pulled the unit back when it received additional higher bids for that unit.

On Friday, stores located in Southern New Jersey, Long Island, N.Y., and Pennsylvania will go to auction. Both events are scheduled to take place at the law offices of Weil, Gotshal & Manges in Manhattan.

A&P has previously disclosed that Wakefern Food Corp., the cooperative that controls that ShopRite chain, has bid on a package of 12 units and that Bogopa Services Corp., owner of Food Bazaar, has bid on four stores. Morton Williams Supermarkets has made an offer for three stores in Manhattan, and landlord Federal Realty has bid for three units.

In a statement issued Wednesday, the United Food and Commercial Workers union said representatives of local UFCW and Retail, Wholesale and Department Store unions would attend the auction “to strongly present their position that these stores should be bought by new owners who will not repeat the mistakes of the past.

“Our local unions stand ready to partner with responsible companies who understand the tremendous value of our hard-working and dedicated members. UFCW and RWDSU members are totally committed to the communities they serve and can be depended upon to give their customers the better grocery store that they’ve been waiting for,” the statement continued. “With the right management in place, we are confident that these stores can be successful.”

With the anticipation that some stores may go unsold, the UFCW said it would host resource fairs in New York and New Jersey to help workers and their families. The organization has also set up a website containing links to job training programs and state, federal and local benefits available to displaced workers. Labor unions represented around 93% of A&P’s 28,500 employees at the time it filed for bankruptcy in July.

In other bankruptcy proceedings this week, a hearing on A&P's motion to reject its labor contracts and impose a final labor deal has been adjourned until Oct. 16.