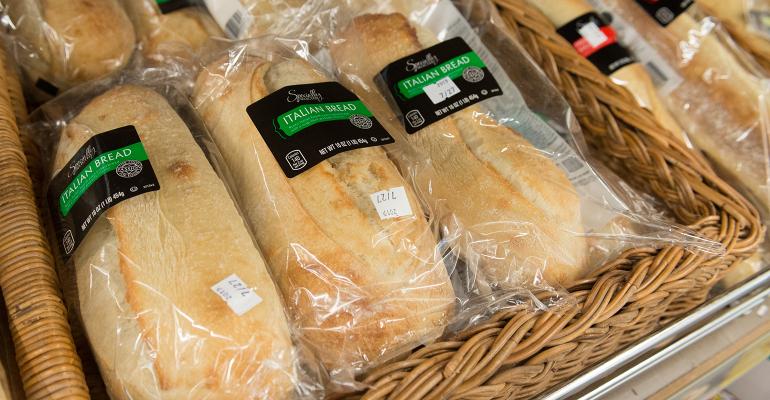 Aldi has apparently extended its test of in-store bakeries in the U.S., adding an amenity it already offers in other countries and one that is already offered in the U.S. stores of rival Lidl.

As reported this week on the website of Brick Meets Click, Aldi has opened an in-store bakery in a recently relocated store in Batavia, Ill., where the German-owned chain has its U.S. headquarters. The store has also been expanded by about 3,000 feet and remerchandised with fresh departments taking center stage.

The relocated Aldi includes an organic produce display at the entrance, and produce and deli products occupying the entire first aisle, Brick Meets Click reported. Extensive new signage also calls attention to the fresh offerings, which also include fresh meat and seafood at the back of the store.

The bakery appears to be configured in a similar way to those at Lidl, the German rival that made its debut in the U.S. last year with a larger store format that includes in-store bakeries.

Like the bakeries at Lidl, the Aldi bakeries feature self-service cases that are stocked from behind, where items such as breads, doughnuts and pretzels are baked in-store, according to Brick Meets Click.

“It was only a matter of time before Aldi would match Lidl’s in-store bakery concept on the East Coast,” wrote Bill Bishop, chief architect at Brick Meets Click.

She declined to comment on Aldi’s plans for future in-store bakeries.

According to a 2016 report in the Milwaukee Journal Sentinel, Aldi was planning to launch a three-store test of in-store bakeries in Wisconsin, but it’s not clear if those plans even came to fruition. Bakeries were planned for Pewaukee, Oak Creek and Greenfield, Wis., with openings slated for early last year, the newspaper reported.

Aldi is “excited to bring a new in-store bakery test concept to our Oak Creek store,” the newspaper reported an Aldi divisional president as saying.

Adding bakeries to those stores required building out the size of the existing building by about 500 square feet, according to the Journal Sentinel.

In March of last year, Aldi opened a 19,500-square-foot store in Kenosha, Wis., that included an in-store bakery, according to a report in the Kenosha News.

In the U.S., Aldi has been rolling out an aggressive remodeling program nationwide that includes an emphasis on perishables and improved ambiance. The new look has reportedly been driving higher sales volumes, particularly in California, where the company began opening stores in 2016 that featured the expanded perishables offering.

Last February Aldi unveiled plans to spend $1.6 billion to remodel more than 1,300 locations by 2020. Then in June it unveiled an accelerated expansion plan, in which it would invest another $3.4 billion to have 2,500 stores open by the end of 2022. Aldi currently operates more than 1,700 stores in 35 states.

This week the Dayton Daily News reported that Lidl has withdrawn its municipal application for a planned location in Beavercreek, Ohio, and previous reports have cited canceled stores in New Jersey and Virginia.