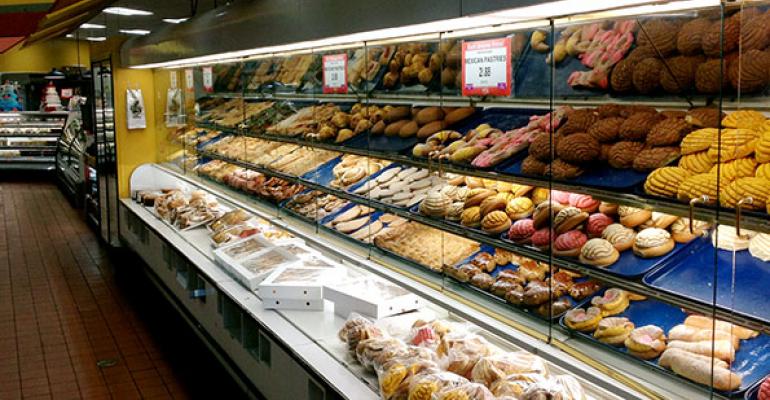 Authentic, ethnic bakery items are a core traffic driver for many supermarkets seeking to appeal to specific demographic groups.

For many operators, however, the attraction of ethnic products spreads beyond the original target group and begins to draw more mainstream shoppers. Meanwhile some ethnic supermarket operators are expanding their offerings with more mainstream product as second- and third-generation immigrants become more acculturated.

Other operators say they do see some ethnic bakery items crossing over to gain more widespread appeal, while other ethnic items remain almost exclusively the province of Hispanic-oriented locations.

“Customer palates are more sophisticated, and they are looking for items that they’ve tasted while vacationing or eating in restaurants,” said Maria Brous, a spokeswoman for Publix Super Markets, Lakeland, Fla. “They look to their grocer of choice to provide those same offerings in-store.”

Examples of products that originated as Hispanic-oriented items but have garnered widespread appeal at Publix include rice pudding, tres leches, bread pudding with guava, flan, guava and guava/cheese turnovers, and dulce de leche.

Other items that Brous said “continue to resonate almost exclusively in our higher Hispanic indexing stores” — such as its Publix Sabor locations and other Publix supermarkets in Hispanic areas — include ham and chicken croquettes, empanadas, authentic Cuban bread, media noche bread and crumbled dulce de leche.

“In the beginning it was probably just people of Polish descent that were buying them, but it isn’t that way today,” he said. “Young people of all different backgrounds will buy them.”

Chickery noted that Riesbeck’s has sought to appeal to more mainstream consumers by broadening the filling selection from the traditional prune flavor to a more familiar range of flavors, including apple, blueberry, Bavarian cream, chocolate, peanut butter and others.

This year the 14-store chain has a goal of selling $362,000 worth of paczki, which are only offered 64 days a year in a window ending just before Easter.

“During the Lenten season, everybody buys them,” Chickery says.

Hejny of Unified said one trend that could be taking hold in the ethnic bakery niche is a focus on more healthful offerings. Although he said he has not seen much activity around low-fat or sugar-free Hispanic offerings yet, he said he has seen a bigger focus on health in the deli area of Hispanic supermarkets, and “generally we have seen where one part of the store goes, others start to follow.”