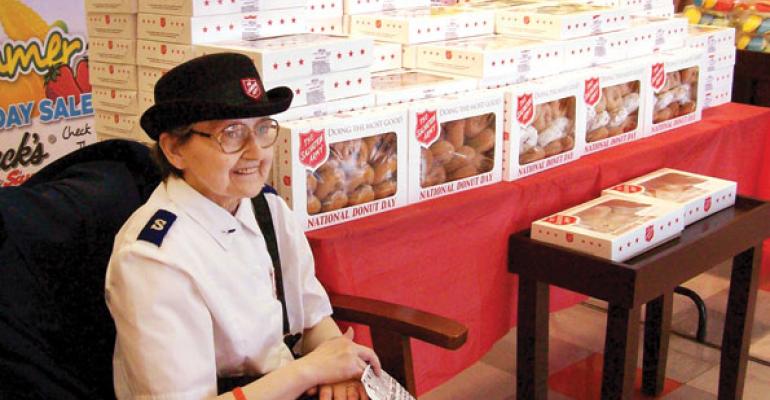 As usual, local dignitaries were invited to participate in the third annual event orchestrated by the Greater Cincinnati Retail Bakers Association and the local chapter of The Salvation Army.

“Just about everybody, including our new police chief, James Craig, showed up, but ironically the weatherman did not,” Dennis Smith, president of Paper Products Co., laughingly commented.

A crowd of onlookers, not as big as last year’s but just as enthusiastic, participated in doughnut stacking contests and other activities, Smith told SN. Supermarket retailers involved this year included Buehler’s, Remke, Niemann’s and Coborn’s, he added.

Smith and Marilyn Harris, local radio show host and food consultant, co-hosted this year’s event sponsored by suppliers BakeMark and Dawn Foods. Among other things, the co-hosts tasted and described, over a PA system, signature doughnuts supplied by area bakeries. 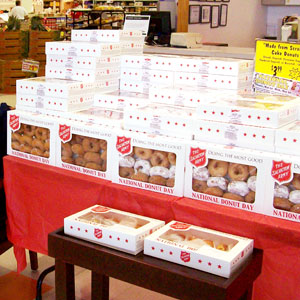 Spurred by his success with cake doughnuts packed in red and white boxes bearing The Salvation Army’s logo, Chickery decided to extend the promotion to every Friday in June. As a result, he rang up $18,000 in cake doughnut sales last June, and expects to hit that total again this year by extending the promo to every Friday this month. It wasn’t a difficult decision to again extend the special, Chickery told SN. The dozen-count doughnuts in boxes bearing The Salvation Army logo are put on special for $3.99, a dollar off the everyday price of $4.99.

“We donate 10% of the total proceeds to the local chapter of The Salvation Army,” Chickery said.

On Friday, June 8, volunteer Kay Bonham from the Steubenville, Ohio, Salvation Army visited Riesbeck’s flagship store. She talked to customers about the Salvation Army’s role in the rise of doughnut popularity. The Salvation Army first served doughnuts to U.S. troops overseas during World War I, she said, as she handed out an outline of the doughnut’s history.

Schnuck Markets, St. Louis, conducted a weeklong promotion that benefitted The Salvation Army during the week of National Donut Day.

“We are still tallying up sales now but, 50 cents of every specially marked 6-piece box of glazed doughnuts will be donated to The Salvation Army,” Lori Willis, Schnucks’ director of communications, told SN.