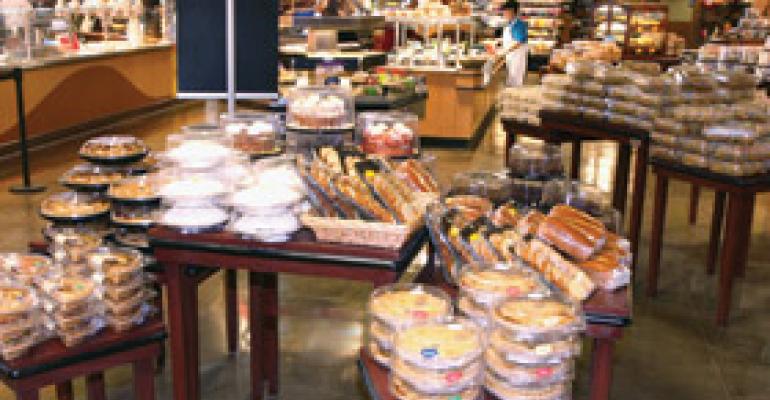 Research indicates that even as they tighten up their budgets in other areas, consumers are still indulging in desserts. And, while cupcakes — in sizes from mini to gigantic — hold their popularity, pies and fruit tarts are gaining on them.

A full 70% of U.S. consumers eat dessert at least once a week, and not always at a restaurant, according to Technomic's Dessert Consumer Trend Report 2010, released last fall.

As a result, baked goods on limited services menus rose 20% from 2008 to 2010. Granted, this reflects some new restaurant unit growth during that time, but even so, it's still a significant increase, according to Sara Monnette, director of consumer research for Technomic.

“Pies and tarts are part of the increased prevalence of baked goods on all sorts of menus,” she noted.

In many supermarket bakery departments, desserts held steady during the recession, with new sizes and new takes on classics such as pies and brownies bolstering sales, retailers told SN.

At Kings Super Markets, Parsippany, N.J., Bakery Sales Director Kenneth Downey has his eye on the pie, as do other retailers. Size is making a difference.

“Pie is back, and we're just now adding a new dessert-for-two line, which includes 6-inch pies in six varieties, as well as 4-inch double-layer cakes.”

The downsizing of the two popular items has a little bit to do with mitigating sticker shock.

“We've had constant price increases in ingredients, leading to higher retails, so shrinking things down in size makes a more appealing price,” Downey said. “Convenience is a factor, too, though,” he said, as he explained why smaller is better. Customers don't want to waste anything, and the size is just right for singles and two-person households.

While Downey was enthusiastic about the just-unveiled smaller cakes, he said he was particularly excited about the 6-inch pies set for a splashy launch next month.

“It's been a hot year for pies. In fact, this past year has been our best ever for pies,” Downey said.

“When they do, we'll get more people trying them [because of their smaller size] and they'll see the quality, and come back for more,” Downey said.

“We're right in the middle of pie cuttings as we speak,” said Tammy Kampsula, bakery director for the 50-unit chain.

“Pies are getting hot. Right now we're doing a whole line of 9-inch and 8-inch pies, and we'll go with a line of 5-inch ones. They'll definitely fill a niche.”

In addition to smaller fruit pies, Kampsula is focusing on specialty pies, as well, and thinking up ways to make them stand out.

“We make our own 8-inch, meringue pies in store — lemon chocolate and coconut — and we've just now gone to using more meringue to get that mile-high look,” she said.

We've tripled the amount of meringue we use, and have boosted the retail by 50 cents, and they're doing well.”

Kampsula said she thinks the 5-inch pies will be good for smaller households.

“It's a comfort food. Maybe it reminds people of their childhood homes. They're very portable.”

But that's not to say United Supermarkets isn't right on it when it comes to cakes.

“Cakes are doing fine for us, single layer and double layer, and cupcakes are still as hot as they were a year ago,” Kampsula said. “We've named them — giants, fairies and pixies.” The giants, four and a half ounces, sell for $2.49, the fairies at a traditional one-and-a-half ounces are $1.99. Then, there are the one-ounce pixies for 99 cents.

Traditional white and chocolate are the best sellers, Kampsula said, but red velvet is making big strides in popularity.

Giant cupcakes surged in sales even through the dark days of the recession, probably because customers perceived them as the best value. A 5-inch double layer cake was $4.99, while giant cupcakes could be had for $2.99.

Meanwhile, Kowalski's Markets in St. Paul, Minn., gives customers the option of downsizing their pies by simply cutting their standard 9-inch pies in half.

“Specialty pies have been a strong category for us for more than a year, and their strength encouraged us to try selling half of the 9-inch pies,” said Steve Beaird, bakery facility manager at 9-unit Kowalski's.

Beaird explained that sales now of whole pies are not up, but the good news is they're not down.

“There's always the worry that you'll butcher the sales of the whole pie if you add something else in the category, but we didn't. The halves are all added sales. That's where growth is coming from.”

Beaird attributes the very palpable success of the half fruit pies to several factors, including the way they're packaged.

“They're in half pie containers. They make those now. So the halves look just great. The colorful cross section faces out. They've definitely become impulse buys,” Beaird said. “We went down the small pie road a while back, but, for us, it didn't work. They lost their pop.”

Since Kowalski's Markets' in-store bakery merchandising is totally self-service the little, round pies didn't stand out enough, while the half 9-inch pies are big enough to make a statement.

Fruit tarts, one might think, would be a stand-out in a run of self-service cases, but at Kowalski's they're seasonal, Beaird said.

“We do them only when fruits and berries are in season around here, from Easter to June. Otherwise, the cost is too great. If we were in California, and not Minnesota, the story might be different. But, in season, we sell a lot of them.”

At United Supermarkets, fresh fruit tarts have been a mainstay for a long time, Kampsula told SN.

“We do them in three sizes — 9-inch, 5-inch and a mini 2-inch, and we've always had strong sales with them. Sales got stronger in the last year, possibly because we've increased sampling of them.”

All sizes have done well, but Kampsula, like other retailers, sees customers looking for smaller items.

Bite-size and other small pastries are an increasingly popular option as consumers look for a healthy way to indulge in sweets, consumer researchers said.

It also gives customers a chance to try several varieties.

Kings Super Markets has two-bite, red velvet cupcakes that Downey says fill a niche for lunch boxes, after-school snacks and other times when a small indulgence is just right.

“Sales of those are flat but I'm not about to get rid of them. They have a role.”

At 50 ounces, the big new item in Kings' in-store bakeries is a well-promoted line of fruit tarts.

“Our new fruit tart is the crown jewel of our bakery department, bigger and more luscious than ever before,” Downey said. “The rich, pure butter crust is filled with sweet almond custard and topped with a swirl of fresh fruit and apricot glaze. It's the benchmark, I'm sure, by which other fruit tarts will be measured and it's only at Kings.”

Kings' hand-made tarts are available in blueberry, strawberry, and mixed fruit. The newest, soon to be launched, is a chocolate-covered strawberry tart. They're all 10 inches and retail for $24.99.

Kings' tarts are handmade with a real shortbread shell.

At a recent event at the chain's flagship store, customers were given the opportunity to choose the cut fruit that would top their tart.

While pies and fruit tarts have a retro appeal, so do brownies and sandies. Some are turning up with flavor combos like chocolate-jalapeno.

“Over the last year, they've just taken off. They're six for $6.99, but they're a pretty substantial size - three inches long and weigh three and a half ounces.” The most recently added flavor in that category epitomizes a growing trend that combines savory and sweet. It's a brownie, drizzled with caramel and sprinkled with seasalt.

Researchers at The Hartman Group, Bellevue, Wash., travel a lot, looking for what is new and what is gathering popularity, and SN spoke to a researcher there to see what she's been seeing in the baked goods arena.

“We are seeing a huge wave of seasonal fruit pies in a variety of formats making a hit, and cupcakes are still there, largely due to the bakery boutique. This has gotten in-store bakeries to jump on the bandwagon and increase the quality of their cupcakes,” said Melissa Abbott, Hartman Group's director of culinary insights.

But, “the most significant trend we are seeing is diminutive-size dessert treats. From pie pops to cake pops seen at Starbucks and Whole Foods,” Abbott added. “These tiny treats encourage consumers to indulge in small sizes, with high quality ingredients. To have a smaller version of the real thing, or a couple of tastes of smaller size treats in the style of tapas, encourages sharing and trial of innovative flavors.”