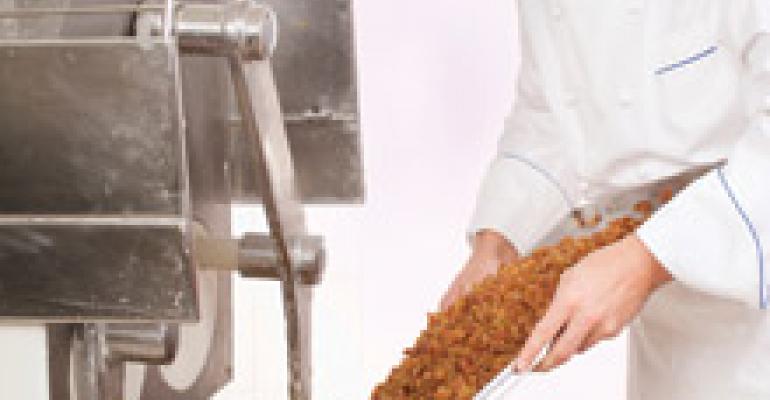 With ingredient prices on the rise, in-store bakeries evaluate product assortment and monitor stales to limit waste and shrink

In an ideal world, when an in-store bakery makes, say, 45 red velvet cupcakes, all of those cupcakes would be quickly and lovingly devoured by adoring shoppers. Sadly, sometimes 45 shoppers aren't in the mood for red velvet, or a torrential downpour or a school holiday keeps them out of the store. Waste and shrink come with the territory in fresh departments, but how can in-store bakeries waste as little as possible?

Abbatemarco gave the example of baking 36 hardrolls on a Sunday. “If you pull 18 on Monday morning because they're stale, you'll have to change your production sheet for the following Sunday. Cut it back to [about] 24 until you find the spot where you need to be,” he said.

Abbatemarco said he tries to keep the stale percentage in Food Circus's smaller stores to 12% to 14%, and 10% in larger stores, since any lower percentage leads to out-of-stock conditions.

Robin Kuczynski, deli retail manager at PCC Natural Markets, Seattle, agrees that it's important to keep shrink balanced. “We use shrink as a tool to determine how far we can push sales; zero or too low shrink tells us that we are losing potential sales.”

Despite the simplicity of Food Circus' system, challenges arise. Approximately twice a year, Abbatemarco needs to have employee meetings to reinforce the importance of record keeping.

“We did have a problem where it slipped this year and they were running like 18% stales. Then you're affecting the gross profit by about two points. And that's a pretty good chunk of change,” Abbatemarco said.

Sometimes, though, the numbers don't speak for themselves, so Food Circus employees will note factors affecting sales. Rain on a major outdoor grilling holiday like the Fourth of July could have a big negative impact on hamburger bun sales, for example.

“They make those notations and then they have to watch that,” said Abbatemarco. “They'll watch the weather forecast and make adjustments accordingly.”

Marda Stoliar, director of the International School of Baking in Bend, Ore., also advises bakeries to make sure they have a good calendar of area events. “Holidays, a race in the town, all of those things can make a huge difference,” she said.

Stoliar also suggested that, for a year, bakeries keep track of sales for the day and information like the weather and town happenings in order to plan for the next year.

Other retailers, such as Lubbock, Texas-based United Supermarkets, focus on product mix. “The key to reducing shrink is having the right products at the right time. We have implemented internal tracking systems that monitor sales, ‘carryover’ that's still fresh and markdowns,” said Tammy Kampsula, bakery business director at United.

“To maximize sales, we also utilize SKU rationalization — reviewing SKUs to eliminate low-performers. From a sales perspective, sometimes it's necessary to ‘reinvent’ the product — either by reformulating the ingredient mix, redesign the package, etc.”

Kowalski's Markets, St. Paul, Minn., constantly reviews its product offerings. Steve Beaird, bakery director at Kowalski's, said that a lot of companies continue selling products despite bad performance because they've made that product for years or the competitor offers something similar.

At Kowalski's, products have six months to earn their keep. After that time, the product is either a success, or it's improved, or it's out the door.

“I run the central bakery for the company and out here we have about currently just under 200 SKUs, and … within the last two years we've probably turned the bottom 100 completely over to new items,” Beaird said.

And, Kowalski's remains prepared to eliminate its darlings — or at least reevaluate them.

When reviewing a product, Kowalski's will look at the quality, market, price, pack size, size of the product and the way it's finished.

With one bakery item, a 12-pack of bite-sized cheesecakes, a small change made the difference. The cheesecakes were popular with Kowalski's employees, but just weren't catching on with customers despite being promoted and demoed.

“[The customers] weren't buying, so what we decided to do since we liked the product so much was we went to a four count. It just exploded. We can hardly keep them on the shelf,” said Beaird.

“The biggest challenge today, I think, and has been in the past as well, is limiting the assortment that you're trying to produce, because variety basically is the kiss of death,” said Mangano, who also advocates a 35% spread between gross profit and labor to enhance in-store bakery profits.

“So the challenge there is for people to look at the 300 or 400 items that they're producing and say, ‘How do we get this down to 100, 150 items?’ And go back to making that the best we can and selling that the freshest possible way, increasing the sales, increasing the customer satisfaction and actually eliminate the shrink and waste that comes with that.”

Retailers should evaluate their product mix regularly, every 10 to 18 months, Mangano recommended.

To avoid wasting products, some retailers also take leftover bakery items and repurpose them into new products. Retailers SN spoke with offered a limited amount of these repurposed products.

There may be more room for recycled products in in-store bakeries, according to Stoliar. She suggested turning leftover almond-based products into teacake, or making rum balls from the bumps cut off of chocolate cakes for frosting.

Rum balls are “usually fairly small and people like them because they could be a $1, $1.50 item, so sometimes having at a lower price point makes a really good situation for the bakery, and it's still going out the front door,” said Stoliar.

Big bakeries and in-store bakeries often don't have the flexibility of small bakeries in a lot of ways, she said. “They don't have a barcode for it. They have an ingredient list for it, so it just doesn't fall into their product line,” said Stoliar, noting that without incentives for employees to go the extra step, sometimes it's easier to just throw out the product.

On the other hand, Mangano urges caution with repurposing items. “Unfortunately, unless there's a real strong discipline, there's a good chance that what they're going to reprocess may not be the best quality.” He added that inferior products can prevent repeat sales.

And, repurposed products can sometimes make it difficult to create consistency between stores, Beaird noted. Stores aren't always staling the same items, “so it's hard to have consistency from store to store if you're trying to rely on stales.”

Another problem, Beaird pointed out, is that the labor used to repurpose products can be more costly than ditching the stale product. However, Kowalski's does repurpose some products between departments, using fruit from the produce department for items like fruit tarts, where the labor isn't increased.

While the benefits of recycling products vary by retailer, most retailers would agree that it's important to avoid wasting ingredients.

“It's interesting, I can always walk into a bakery and I can always tell who owns the bakery by how they scrape the bowl,” Stoliar said. “If it's sort of like it's just half scraped and the rest of it goes in the sink, I know it's just a worker, not a particularly inspired one, but just a worker. Where maybe a manager or an owner … really cleans the bowl and gets the bowl scraper out.”

Stoliar advocates keeping this “bowl wash” to 10% and creating incentive programs to encourage employees to cut waste and shrink.

If there's an incentive program in place, “people will start having ideas with different kinds of cookies that they can turn into crumbs and like biscotti crumbs can then become a highlight on their cheesecake as their crust, and they can advertise it,” she said.

The most successful incentive programs give employees an opportunity to be singled out and attend a regional show with a manager, instead of a material prize, Stoliar said. Plus, these kinds of incentive programs double as an investment in employee training and knowledge.