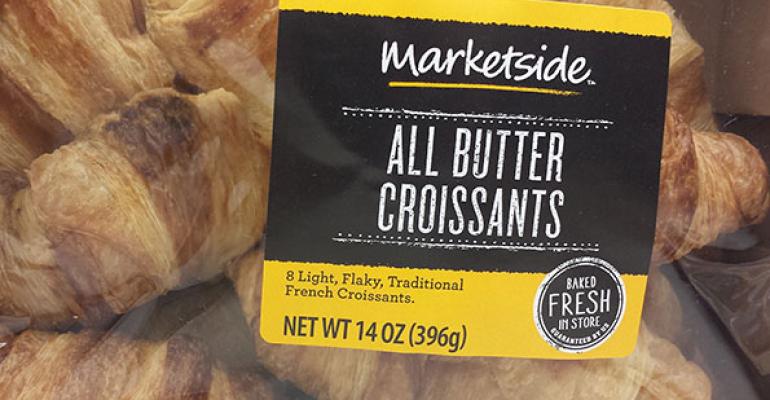 Walmart’s efforts to make a better impression in fresh are taking shape in new product formulations, a greater emphasis on trend-right and occasion-right items, and in emphasizing them behind new work processes and revamped department layouts.

“It’s an area that our customers are telling us is relevant,” Shawn Baldwin, Wamart’s SVP of fresh, said in an interview with SN Tuesday. “It’s something they’re telling us they want us to spend more time on. And they like it when we bring in more variety, and more new things on a consistent basis.”

According to Baldwin, these trends are playing out now in areas like bakery, where an effort to improve product quality and variety is helping to improve the department’s share of the average Walmart food basket. Baldwin declined to quantify the figures but acknowledged “bakery is a bigger piece now than than it’s been in the past.”

In bakery, Baldwin said Walmart was seeing success with items like individual dessert fruit pies, selling at 2 for $1. Offerings like these allow shoppers to treat themselves on a budget, he explained.

“To be honest, anything that’s small and decadent is on fire right now,” he said. “We can’t come up with enough small, bite-sized versions of the things we’ve carried in our stores for years.

“There’s a lot of people who shop with us for whom food is a little treat for them,” he added. “There are some folks who make more money and spend on things that are more discretionary, but a lot of folks who treat themselves with food, and we want to be able to offer more of that.”

Walmart has also reformulated a lot of its offerings in bakery including pies under a new house brand, The Bakery, and brought in new products with better quality recipes. These items have been selling better even before the traditional holiday pie season, he noted.

“We’ve gone back and really sweated the quality of the stuff that we were carrying,” Baldwin said. “Not that it was bad before, but it’s better today.

“We’re seeing growth in pies that way outpacing what’s happening across the rest of the retail landscape because of the attention to detail we’re putting into them and the quality we’re putting into them,” he added. "We’re changing the fruit-fill, changing the packaging, changing the crust. We went back through every bit of it, ate all of them, kept the ones we liked and brought in new ones we liked and as result have a much better offering than we used to have.”

Baldwin said Walmart was also paying more attention to occasion-based shopping in bakery, making a point to add items like refrigerated garlic knots under the Marketside house brand, easy to prepare as a side dish or appetizer. “They’re almost a perfect item for a bakery because it fits so many occasions,” he said. “We’re trying to be more thoughtful about how we solve occasions for shoppers, and [garlic knots] is a good, last-minute item when you don’t know what to stick with a meal, or if you have people coming over. They smell great when you cook them, and most people will grab a second one when you’re not looking.”

As detailed in the retailer’s annual investor conference earlier this month, fresh continues to be a point of emphasis of Walmart’s U.S. CEO Greg Foran, who candidly acknowledged a need to improve perception of fresh food, particularly for stores in competition with stores that themselves are good in fresh.

“Our customers love fresh, so the first thing we want to do is give them more of what they like,” Baldwin added. “That sounds simple but it’s what we do for a living.”

“They’re telling us they want more [fresh] things, they want to see it fresher, with great prices when you walk in the door. So we want to set the tone for that in the bog box and small [Neighborhood Market] box. The key to that is produce, because that unlocks the rest of the grocery basket. If you have a good produce department they generally will buy all their groceries from you. And if you don’t, they’ll go to somebody else. And if we get you excited about our fresh products they get used quicker, and we see you again, which is a wonderful thing.”

Part of the effort, Baldwin noted, involves new ways of presenting product, including lower fixtures providing a greater visual impact — in new Neighborhood Markets, for example, customers can see back to the deli upon entering the store. And in a new Supercenter that opened earlier this month near company headquarters in Bentonville, Ark., Walmart is testing a 12-foot counter displaying fresh steaks.

This display does not mean Walmart was returning butchers to stores; rather, it showcases its best “case-ready” steaks unwrapped, and provides associates a better opportunity to engage shoppers about the product, Baldwin explained.

“People have looked at that and said, ‘Wow. I wish you carried this item before,’” Baldwin confessed. “And I say, ‘We do. It’s over there in those packages. We’re just showing it to you in a new way over here.’”