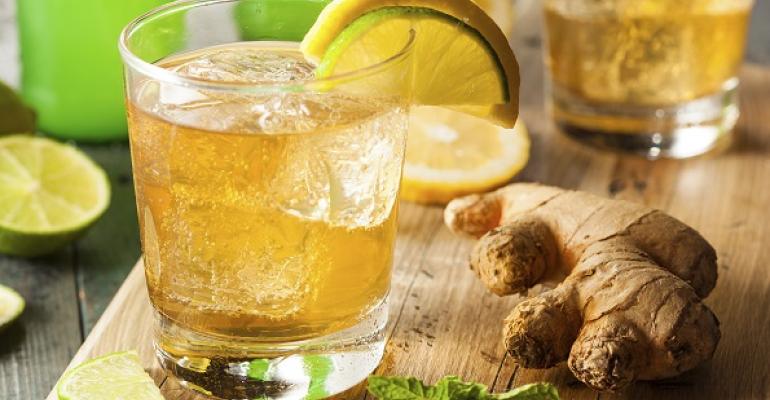 The surging popularity of craft soda &ldquo;is riding the coattails of craft beer, I think.&nbsp;People like the fact that it&rsquo;s locally produced, comes in a glass bottle, and is made with cane sugar.&rdquo; &mdash;SCOTT KARNS, Karns&nbsp;Quality Foods

Consumer concerns about the healthfulness of carbonated soft drinks — along with a growing interest in locally made products, innovative flavors and more natural ingredients — are playing right into the hands of the craft soda industry.

Brewed in small batches using cane sugar and often lacking preservatives and other chemical additives, craft sodas appear to be winning over consumers who increasingly view soft drinks as an occasional treat.

The surging popularity of craft soda “is riding the coattails of craft beer, I think,” said Scott Karns, the president of Karns Quality Foods, an eight-store chain based in Mechanicsburg, Pa. “People like the fact that it’s locally produced, comes in a glass bottle, and is made with cane sugar.”

Karns Foods has offered craft soda from the Appalachian Brewing Co. for the past few years, ever since the local brewery began bottling soft drinks. The chain offers the full line of bottled Appalachian Craft Sodas, which include root beer, diet root beer, white birch beer and ginger beer.

This summer, sales of the craft soda brand are up 77% year-over-year at Karns Foods locations, driven by an August sales contest the chain held among the stores, Scott Karns said.

“They have done quite well for us,” Karns told SN. “Keep in mind that it is not only a craft soda, but it is a local soda for us too. The brewery is not even a mile from my office, so if I want to go out at lunchtime and see them making sodas, I can do that.”

According to a recent report from research firm Mintel on natural and craft soft drinks, 57% of adults agree that carbonated soft drinks made with natural ingredients are healthier than those made with artificial ingredients.

The Mintel research shows that craft soft drink sales could be poised to grow: While 66% of U.S. adults do not currently drink craft sodas, 44% of those who do not drink them said they are interested in trying them.

“The definition of health is changing from desiring low/no-fat and -sugar, to ‘real’ or unadulterated ingredients,” said Elizabeth Sisel, beverage analyst at Mintel, in a statement. “Natural and craft brands tend to feature ingredients in more natural forms, to position products as a better-for-you option.”

“There’s a better-for-you halo around them, and that stems from their use of natural ingredients and their local, small batch production,” she said.

She cited in particular craft bottlers’ use of cane sugar, which she said is perceived by consumers as healthier than corn syrup.

Bobby Hearn, editor in chief of FiveStarSoda.com, a Springfield, Mo.-based website that reviews craft soft drinks, agreed that health concerns are a major factor driving consumer interest in craft sodas. That dovetails, he noted, with craft bottlers’ use of high-quality ingredients.

“A lot of artisan sodas are being made with real hand-pressed fruit, not just syrup or something from a flavor house,” Hearn told SN. “There’s a lot of experimentation with fruits, herbs, and spices, combining flavors you would not normally expect to find in a soda. A lot of these [small soda bottlers] will start out at farmers markets, and then they will try to get their sodas into local grocery stores and restaurants and bars.”

Although craft sodas carry premium price points, consumers seem willing to trade up for what they perceive to be a healthier product with better ingredients, Hearn said.

“The bottom line when it comes to soda is whether or not it tastes good, and the better quality ingredients you use, the more likely people are to buy it,” he said.

Meanwhile, craft beers are seeing sales growth in double digits in supermarkets, according to data from Information Resources Inc. provided to SN by the Boulder, Colo.-based Brewers Association.

“Supermarkets are the off-premise channel where craft does best,” said Bart Watson, chief economist at the Brewers Association.

“I think the underlying demand trends, the much stronger share in on-premise, and the history of rapid growth show continuing opportunities for craft,” Watson told SN.

Much like some of the trends driving craft soda, craft beer sales are benefiting from an increased interest in higher quality ingredients and locally made products, he said.

IPA styles are by far the fastest-growing segment of craft beers, he noted, with 27.4% of the share of craft beer sales, up from just 8% in 2008. Also seeing growth are session craft beers — brews with low alcohol content — which include not only session IPAs but also pilsners, blonde ales and others, Watson said.

Retailers have been capitalizing on the craft beer trend by merchandising more varieties of bottled craft beers and emphasizing their local provenance, and by adding taps from local brewers that allow consumers to fill growlers to enjoy a draught-beer taste at home.

And Austin, Texas-based Whole Foods Market, which has long partnered with local craft brewers at stores throughout the country, recently began brewing its own beer at a store in Houston. The Whole Foods Market Brewing Co., which brews 38 varieties, is scheduled to begin distributing beers throughout Texas on Sept. 18.

New IPA! Hop Explorer IPA with Rakau and Azacca hops. Come let us know what you think, should we get more of them? pic.twitter.com/brfZEnIvs9

Fueled in part by a resurgence in popularity of the “Moscow mule” cocktail — made with vodka and (non-alcoholic) ginger beer — ginger has surged as a flavor trend for soft drinks, observers told SN.

“Ginger is the hottest flavor right now,” said Bobby Hearn, editor in chief of FiveStarSoda.com, a website that reviews craft soft drinks. “There are a lot of different takes on ginger beer right now. Some people drink it straight, or mix it with a cocktail. It has wide appeal to a large number of people.”

“I think right now you could put ginger in any soda, and it will sell,” he told SN.

Galco’s was launched in 1897 as an Italian grocery store, but several years ago Nese converted it to a specialty destination for craft beer and soda. He carries about 700 varieties of soda from all over the world.

Another flavor that Nese sees potentially gaining in popularity in craft sodas is mint, although he said very few bottlers have mastered this flavor so far. The ability of craft soda makers to source the right flavorings has been a key to their differentiation and success, he said. He cited the award-winning Mr. Q. Cumber soda and its sibling flavors from the same bottler, Sweet Blossom Rose, Sweet Blossom Jasmine, Sweet Blossom Lavender and Sweet Bloom Elderflower, as examples.

“You have to have people who know where to find the right ingredients for their flavors,” Nese said. “These independent bottlers have a lot of great flavors, and they take a lot of pride in what they are doing.”

Jennifer Aranas, project director at research firm Datasssential, said some of the soda flavors that are hot in restaurants right now and could soon find their way onto more supermarket shelves include herbal and floral flavors — “things like lavender and hibiscus,” she said.

Mentions of lavender on restaurant beverage menus have increased 120% in the last year, she said. Other hot beverage flavors include blood orange (up 93% in mentions on restaurant menus), cranberry, grapefruit, pomegranate and tamarind, in addition to ginger beer, Aranas said.