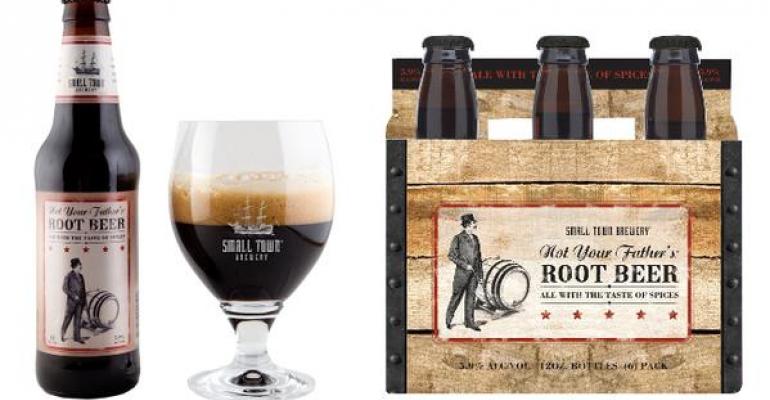 A new segment of beverages puts an adult spin on root beer and other classic sodas.

That’s because they’re hard — packing up to 7.5% alcohol by volume when bottled, and even higher levels of alcohol content on tap.

Made with fermented mixtures of roots and herbs, alcoholic root beers are flying off the shelves at Dorothy Lane Market, Dayton, Ohio, according to Jim Ervin, assistant beer and wine director at Dorothy Lane’s Oakwood store.

The retailer’s biggest seller is Not Your Father’s Root Beer, spiced with wintergreen, sassafras bark, oak, vanilla, anise and other spices. The beer has 5.9% ABV, and is sold in 12-ounce bottles in six-packs for $10.99.

“It’s hard to keep it in stock,” Ervin told SN.

Now available on @Drizly ! @smalltownbrewer 's Not Your Father's Root Beer... download the app and get yours today! pic.twitter.com/7eqNCHHk1Y

To meet growing demand, Small Town Brewery recently announced that it has entered into an exclusive distribution agreement with Pabst Brewing Co.

Jungle Jim’s International Market, Fairfield, Ohio, also sells “Not Your Father's Root Beer,” along with other hard root beer, including those from Sprecher's and SpinDöktor's. They are merchandised near ciders and other "malternatives," like Mike’s Hard Lemonade.

Not Your Father's Root Beer is by far the biggest seller: The retailer recently sold 150 cases in one week, according to Ed Vinson, Jungle Jim’s beer and wine operations manager.

Hard root beer is part of a broader trend of soda-style alcoholic beverages, including hard apple beer and ginger beer.

“Rumor has it that there is even a hard cream soda coming soon,” Vinson noted.

Hard soda appeals to craft beer lovers, as well as those who don’t typically drink beer but want something new and different.

At Jungle Jim’s, for instance, female shoppers are embracing hard root beer, whose retails range from about $5.99 for a four-pack to $10.99 for a six-pack of 12-ounce bottles.

The growing popularity of hard sodas makes sense at a time when consumers are in search of nostalgic foods and beverages, according to Tom Pirko, president of beverage consulting firm Bevmark.

“They looking for familiar products, but in a new incarnation,” he said.