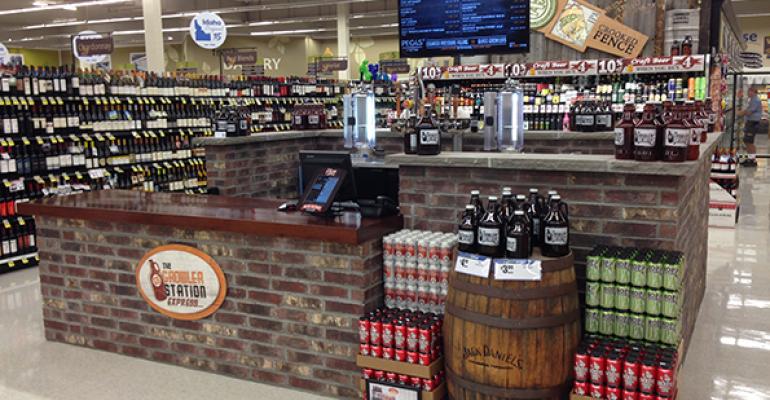 Albertsons continues to expand its tap-beer to-go business, this time by opening its fourth growler station in Idaho.

The Boise-based retailer now has six The Growler Station Express (GS Express) departments: four in Idaho, one in Oregon and one in Arizona.

A growing number of other retailers are also deepening their commitment to growlers.

The Growler Station, Irvine, Calif., has supplied more than 100 retailers — including supermarkets, convenience stores, liquor shops and other outlets — with growler stations in the past four years, according to VP Tony Lane.

“The reason craft beer growler programs are doing so well at stores like Albertsons, Price Chopper, M&W Market and all the other chains we partner with, is because many of the small, local craft beer companies aren’t large enough to bottle their brews. So they are only available in kegs, often direct from the breweries only,” Lane told SN. “Growlers allow craft beer drinkers to purchase smaller quantities at their local supermarkets. In return, the retailer gains loyal customers by being a convenient and exclusive supplier of a product that isn’t available in the same quantity elsewhere.”

Each retailer can brand its growler station differently. Jackson’s Food Stores, for instance, calls its station “The Beer Pump.” Lowe’s Foods has “The Beer Den” and recently hired a Den Master for each location to play barkeep.

“These niche consumers evolve around social media, so its best to reach out to them via Twitter feeds and Facebook fan pages,” said Lane. “Retailers can let people know what craft beer is on tap, tell them about special promotions and announce when limited editions have arrived. Usually, when people hear about limited time brews, our partnering retailers sell out right away.”

Assortment is another item to add to their agendas, he said. Most choose brews made somewhere in the same state or one nearby.

Albertsons’ Desert Ridge store in Phoenix is presently pouring Sunspot Golden Ale, Raj, Odelé Mexican Chocolate Ale and Orange Blossom Ale. Each of these is made by an Arizona-based craft beer maker, including San Tan Brewing, which markets its ales as “specifically brewed for hotter, drier climates…aka, the Southwest.”