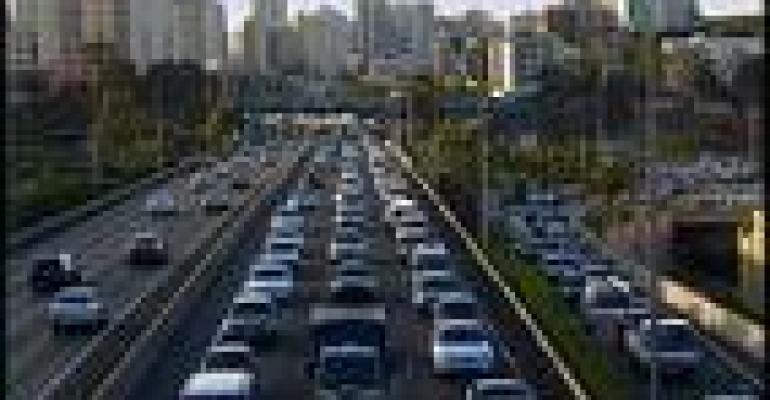 America Gears Down Its Cars

In the four years I’ve lived in New York, I’ve gotten used to buying only what I can carry home from the grocery store. Doing this is nice because its quick, because it’s good exercise, and because we waste less food. But man, sometimes I can’t help but remember fondly those days (college) when I’d load down the car with everything I needed — and didn’t need — for the week, and just drive home.

The automobile, that symbol of American independence, offers many of the conveniences and efficiencies we enjoy. And yet its excessive in so many ways as well, for ourselves and for the environment. In the down economy, Americans scrapped 14 million cars and only purchased 10 million, according to a new study by the Earth Policy Institute, leading to a 2% decline in the country’s auto fleet. That’s the first decline since World War 2.

Much of this is due to people taking advantage of the federal “Cash for Clunkers” program, and generally unburdening themselves of the financial weight that comes with owning a car. But the EPI says there’s also evidence that, particularly amongst younger consumers, people want to skip the car to help reduce emissions. It’s possible that by 2020, the institute says, we could own 10% less than the current fleet.

This trend is of particular interest to supermarkets, where store size and metrics are a reflection of how much their customers can carry. With fewer cars, retailers could build smaller parking lots, set up bus stops, and rearrange their store layout to accommodate more grab-and-go offerings.

It’s also a great promotional opportunity, as a couple of retailers have already proven. Earlier this week, Supervalu banner Farm Fresh announced a partnership that will reward customers who green their commute by carpooling, biking, using mass transit or telecommuting. Participants who enroll with NuRide, the partner organization, will receive a $5 off coupon for every $50 they spend at Farm Fresh, and will be enrolled to win a weekly prize of $100 worth of groceries. HEB also joined a similar program through NuRide earlier this year, which enlisted several retailers in a “Commuter Challenge” aimed at eliminating 15 million collective miles from people’s daily trips.