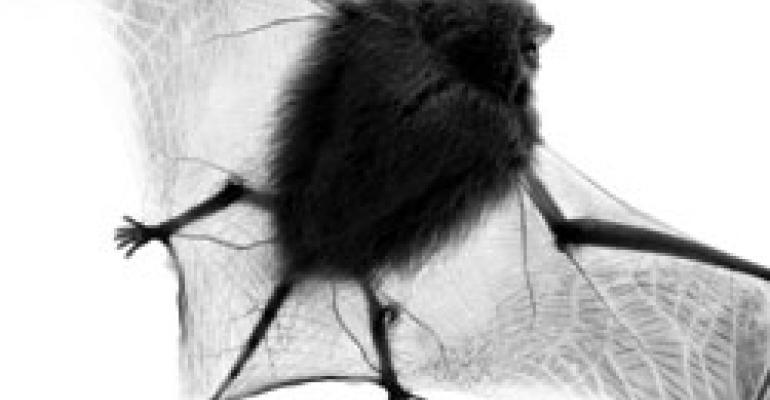 The Bats and the Bees

Experts estimate that last year’s Colony Collapse Disorder claimed nearly one third of all American beehives. Swiftly and mysteriously the tiny pollinators — normally very territorial — flew off, leaving behind empty homes and a swarm of questions.

Now there’s another, equally puzzling die-off that’s occurring in the Northeast. Thousands of bats have succumbed to what’s being called “white nose syndrome.” The name refers to the only visible symptom of the disease — a flaky white fungus that forms around the animal’s nose and mouth. Scientists don’t know much about the fast-spreading killer so far. What’s certain, however, is that it’s draining the bats’ winter fat storage before their hibernation period ends, causing them to starve to death.

This may not sound like news to supermarket operators, but it is. Like bees, bats help pollinate citrus fruits and other plants. They also feed on beetles, moths and other insects that can damage produce crops.

“Most bat researchers would agree that this is the gravest threat to bats they have ever seen,” said Alan Hicks, bat expert with the New York Department of Environmental Conservation.

The bee problem has yet to be resolved, as well. According to the American Beekeeping Federation, the colony collapse rate is similar to last year’s. Scientists have linked the phenomenon with the Israeli Acute Paralysis Virus, but it appears that’s not the only culprit; pesticides and global warming have also made the short list of possible reasons.

The science community is scrambling for answers, and manufacturers are trying to help. Burt’s Bees recently ran a public service announcement prior to screenings of “Bee Movie,” asking audiences to register on the company’s website for a free packet of wildflower seeds. And ice cream maker Haagen Dazs, which is owned by General Mills, recently awarded $250,000 to two research teams working to decode the bee deaths (25 out of its 60 flavors are made from bee-pollinated fruits and nuts).

Amidst the swirl of merchandising and logistics that retailers confront every day, it’s easy to forget that behind our food chain is a complex ecosystem. It’s still a mystery why bats and bees are dying, but that doesn’t mean companies shouldn’t take an active interest.