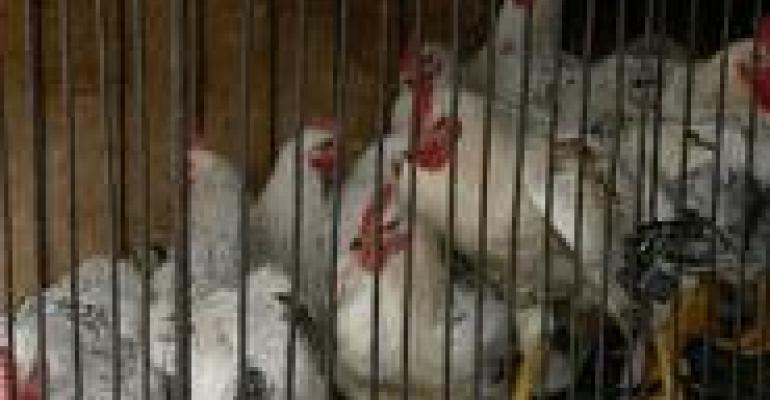 Transitioning to cage-free eggs seemed to be all the rage in the food industry. Wal-Mart recently made this move, as has Trader Joe’s, along with restaurant chains like Wendy’s, Sonic and IHOP.

It’s a thoughtful gesture, for sure, and a smart business move with consumers these days demanding humanely raised food. They’ve seen the pictures of chickens crammed together in cages, of downer cows picked up by forklifts and pigs lolling in their pens. Earlier this month The Humane Society released undercover video taken at one of the country’s largest egg farms, showing workers abusing live chickens and casually discarding scores of dead ones.

But not everyone is on board — not by a long shot. McDonald’s, which serves millions of Egg Mcmuffins every year, had a proposal before its board of directors recently to source 5% of its eggs from cage-free chickens. Doesn’t seem like much, yet the board recommended a “no” vote to its shareholders, saying there’s not enough science to prove cage-free is actually better for the animals and the eggs.

Indeed, as we’re once again reminded, there are business realities that stand in the way of any health and sustainability movement, and the biggest one is price, a factor that McDonald’s and all the other quick-service chains are very sensitive to. And in the fight for cage-free chickens and eggs, farmers and industry groups are hitting back harder than ever. Kansas Farm Bureau president Steve Baccus wrote on the organization’s website that the Humane Society and other groups “seeks to remove meat from our tables.” In Ohio and Missouri, farmers and industry groups have banded together to introduce legislation that would uphold humane treatment standards without placing an “undue burden” on producers.

Personally, it’s hard to understand how you can claim to be humane while still putting chickens in battery cages. As for the science — it’s been well documented that chickens are built to roam and scratch and live their odd, chicken-y lives.

The reality is that, yes, it’s costly and inconvenient to transition to cage-free eggs. But it’s also a reality that consumers are growing increasingly knowledgeable about where their food comes from. The one thing they don’t want to know is that these living, breathing creatures that will eventually end up in their Big Macs and Egg McMuffins have been abused and neglected. One photo can change a lot of minds. Holding out on animal welfare issues has risks these days. Sooner or later, companies will have to answer for their operations, and so it’s best to get out ahead while they can.