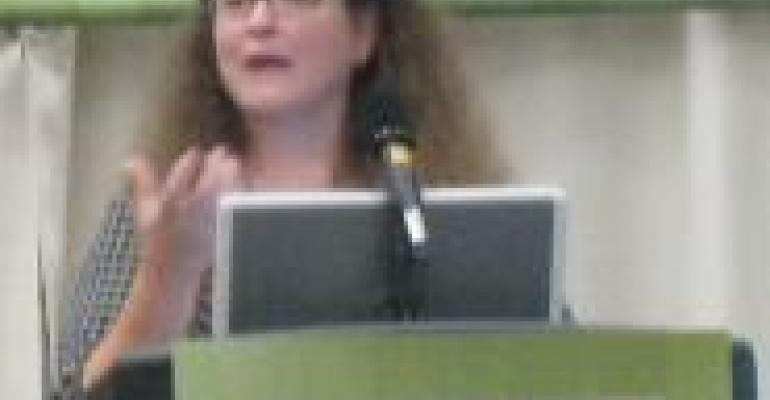 A seminar led by two former retail veterans revealed to me just how changable gourmet/specialty foods are, and how they're often able to boost natural sales simply by changing their color. Gourmet can be ethnic, or natural or be camouflaged as premium private label.

This is good, because the ability to sell a gourmet product in a natural/organic context usually brings higher margins than selling an item that's just "gourmet" or just "natural." Graham Mitchell, president of Sustainable Innovations, and Kim Greenfeld (pictured), president of Campo Verde Solutions, profiled a number of mainstream retailers who've been successful in blending the specialty mystique into their natural/organic selections. Examples are abundant in private label, and aren't limited to Trader Joe's: Albertsons' Essenza line ("better-than" products, according to Mitchell); Harris Teeter's HT Trader label (around the world in 250 SKUs, says Greenfeld); or Ahold's Simply Enjoy line of everyday luxury, indulgent items (which Mitchell helped develop for the retail giant).

Of course, gourmet brands have just as much potential. Take olive oil, for instance. It doesn't matter whose name is on the label, as long as consumers see it as imported, natural and healthful. With one product, you've captured the attention of the wellness shopper, the armchair traveler and the artisan connoisseur. As Greenfeld (who worked 14 years with Trader Joe's) told the audience, "Items that were once thought as unapproachable, limited to the world of hard-core foodies, are now everyday."

The economy being what it is, there are real questions how to sell gourmet these days. Is the category relevant? Certainly, according to Mitchell and Greenfeld. Consumers aren't eager to give up the good life, so if anything, they're looking for deals. And that's where retailers come to the rescue. Crafting your selection of gourmet items based on perceived value (quality + fair price) means shoppers will be able to take heart that they're still eating pretty well.