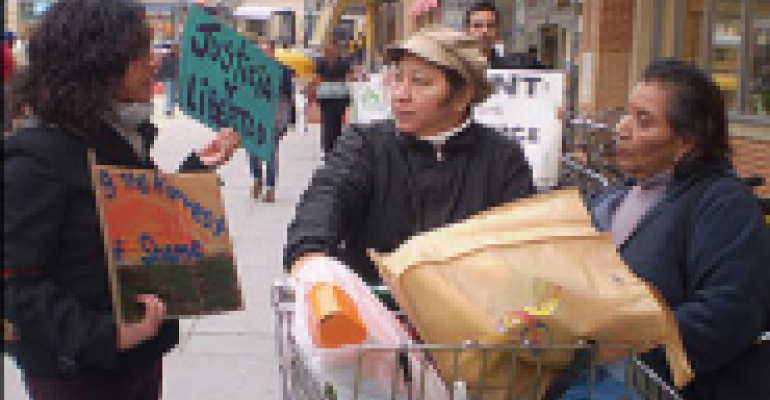 The CIW Brings the Fight to Supermarkets

With the expansion of Fair Trade products throughout stores, not to mention the growing emphasis on employee wellness and philanthropy, supermarkets like to think of themselves as pretty solid corporate citizens.

One influential group begs to differ.

The Coalition of Imokalee Workers is a grassroots organization that advocates better working and living conditions for thousands of Florida farm workers, many of them Latino, Mayan Indian and Haitian immigrants. It has successfully campaigned against restaurants and foodservice companies that source tomatoes, citrus fruits and other Florida produce — persuading the likes of Taco Bell, Burger King, Sodexo and Aramark to agree to its terms of paying an additional penny for every pound of tomatoes, and establishing a code of conduct with its suppliers.

Now, the coalition is turning its focus to supermarkets, starting with four major players: Publix, Kroger, Ahold and Trader Joe’s. The CIW and groups affiliated with it have staged protests outside store locations, organized letter-writing campaigns to CEOs, and coordinated various other means of lobbying the companies to alter their sourcing practices, and to pay the extra penny per pound to growers. Things should really heat up next week, which the groups have designated as National Supermarket Week of Action.

“Grocery stores buy a huge percentage of produce that is produced here in Florida,” said Rudy Cortinas, national coordinator with the Student/Farmworker Alliance, which has partnered with the CIW, in an interview. “We thought it a natural step [to turn to them] after our previous victories.”

The CIW and others have been especially active in protesting Publix, which operates stores throughout Florida. Publix, in response, says the matter is a labor dispute between the suppliers and the growers, and that any worker abuses should be handled through law enforcement.

“Publix does not support any human rights violations and believes that our local, state and federal laws would prohibit such behavior,” said spokeswoman Maria Brous.

Without wading into who’s right and who’s wrong on this incredibly complex issue, it’s worth pointing out that the coalition has built up tremendous consumer support, and is not one to simply be dismissed. Taco Bell went that route several years ago and found themselves out of contracts at more than two-dozen college campuses where students had boycotted the company.

Supermarket consumers don’t skew quite as young as fast food consumers, but Cortinas said his organization and the CIW are courting interfaith groups, local congregations, and other entities that do represent the supermarket demographics. Getting them and others on board, he said, is the key to achieving their goals.