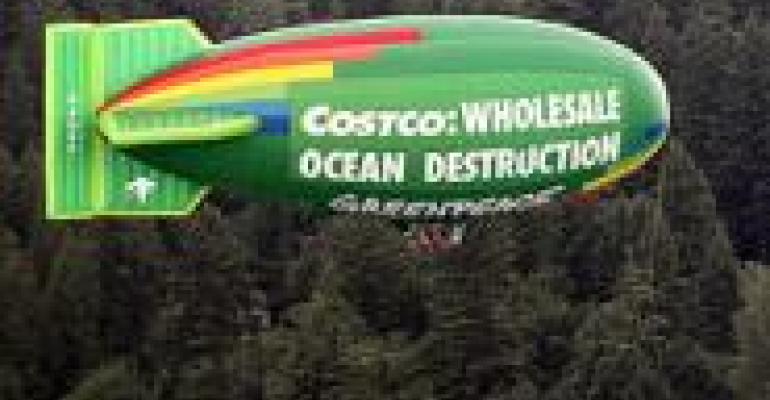 Costco Seafood: Greener By a Dozen

Supermarkets that refuse to address their seafood sourcing policies risk becoming the target of some serious activism. Just ask Costco. Last year the eco organization Greenpeace — fresh off its victory against “Traitor Joe’s” — turned its sights on the mega wholesaler, urging followers to protest their local stores and write CEO Jim Sinegal for selling more than a dozen red-listed fish. The campaign had a clever name: Oh No Costco. An airship emblazoned with the words “Wholesale Ocean Destruction” flew over the company’s headquarters.

Last week, Costco publicly jumped on board. The company announced it would remove a dozen red-listed species from its stores, including Chilean sea bass, grouper, monkfish, orange roughy and redfish, and would only bring them back if certified by the Marine Stewardship Council.

That’s a lot of fish to take out of a seafood department, which goes beyond proving Greenpeace’s clout and speaks to the importance of the issue at hand. Indeed, with a bit of clever prodding, retailers now realize that responsible sourcing goes hand in hand with the future of their seafood departments. Species like bluefin tuna have been fished to the brink of extinction. If choices are to exist in the coming years, twelve fewer options seems a small price to pay.

In addition to Trader Joe’s move to source all of its seafood sustainably by next year, Target has removed many red-listed species and agreed to source only wild-caught salmon, and Ahold is working with the New England Aquarium on its selection. To see just how much progress the industry has made, check out Greenpeace’s supermarket seafood report card over the past three years. In 2008, all twenty retailers received a failing grade. Last year, ten of them passed.

This year’s scorecard comes out next month, and you can bet consumers will be paying attention. In the meantime, Greenpeace is targeting two more retailers it says aren’t swimming fast enough on sustainability: Wal-Mart and Supervalu. It’s not apparent why, exactly, they’re being targeted. Both retailers have taken measures to improve their sourcing. Wal-Mart carries more than two-dozen products certified by the Marine Stewardship Council, and requires its suppliers to go through a third-party certifier. Supervalu, meanwhile, is collaborating with the World Wildlife Fund on improving its selection.

That’s not good enough for Greenpeace, apparently. The organization hopes to overwhelm Wal-Mart and Supervalu with numbers: 25,000 have so far signed the organization’s petition against the companies.