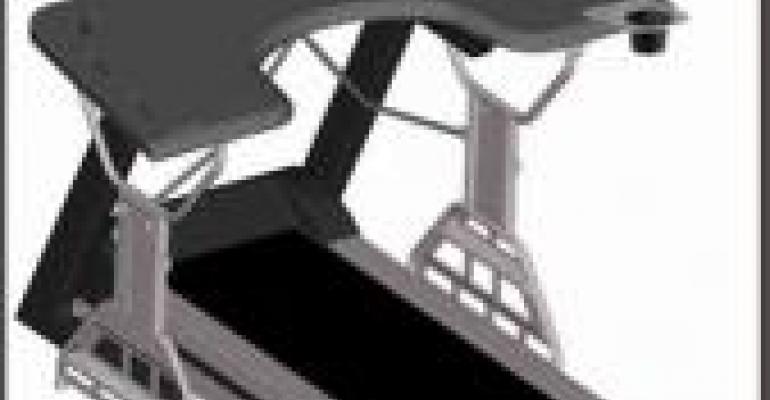 A study out in this month’s issue of Medicine & Science in Sports & Exercise seems to support the theory that a sedentary lifestyle can take a few years off your life. Researchers examined more than 17,000 Canadians between the ages of 18 and 90 years. They found that there was a “progressively higher risk of mortality” from cardiovascular disease, cancer and a few other choice conditions the longer the test subject sat of their duff.

What’s alarming is that the effects were shown to be consistent regardless of sex, age, smoking status or even body mass index. What’s more, even those who led active lifestyles and exercised during their leisure time still remained at risk if they spent a lot of their remaining time sitting.

I originally learned of the study’s findings from a press release that offered a solution to this sitting deathtrap: The TrekDesk.

What’s a TrekDesk, you ask? It’s basically an adjustable-height work station that’s attached to an existing treadmill. Now, a person can walk at slow speeds while they work (without sweating, notes the manufacturer) “ensuring movement throughout the day.”

This is a joke, right? I checked to see if the research exists (it does), and also the if there really is a manufacturer of the TrekDesk (there is, located in Phoenix). In fact, the home page includes a video from a profile on “Good Morning America” and another detailing how doctors at the Mayo Clinic are installing TrekDesk in their offices.

There could be some benefits beyond exercise and health, too. Now when you want to get off the phone, you can say, “Gotta run!” and mean it.