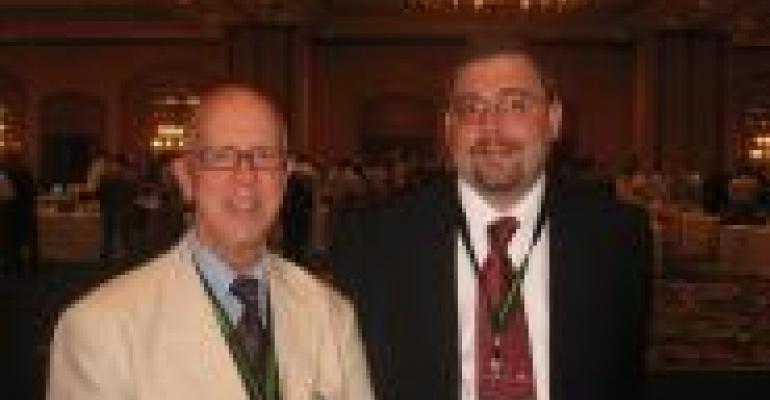 To Door or Not to Door

The FMI Energy & Store Development Conference can really get into some nitty-gritty supermarket issues that seem arcane at first but turn out to have a major impact across the industry. One example that has come up a lot here is whether or not dairy and other open refrigerated cases should have doors.

It's a fairly straightforward matter -- you save energy by enclosing these cases with doors. But the concern is that in so doing, you lose sales because lazy shoppers may not feel like opening the doors, and you suffer a net loss. The result is that many stores, probably a majority, operate cases without doors. Well, at the conference at least two sessions were dedicated to the proposition that all open cases should have doors.

On Monday, two professors from the University of Missouri-Kansas City -- Bryan Becker, professor, mechanical engineering, and Brian Fricke, assistant professor, mechanical engineering, from left to right in photo -- presented the results of their study of the door question. They found that an open display case consumed about 1.3 times more energy than a doored display case. Moreover, they found that there was no significant difference in sales between the two cases. Ergo, use doored cases and save money.

Tom Mathews, a former supermarket executive who is now president of Baseline, Waterville, Maine, a consulting engineering firm, in a session today on designing stores for energy efficiency, urged retailers to use doored dairy cases. "Get on with it!" he declared.

Things are a little more complicated at Target. In a session yesterday on the chain's store design practices, Rich Varda, senior vice president, store design, acknowledged that in the 340 conventional general merchandise Target stores that will have P-fresh food departments by the end of next month, the dairy cases are wide open. Open cases, he said, are needed to convey the "fresh" concept the P-fresh departments are trying to establish in Target's traditional format. Yet he believes that the energy consumption advantage of doored cases "is a goal we should all support."

Varda suggested it may take a government mandate to get the industry to adopt doored cases en masse. But if the professors from Missouri are right, maybe it won't have to come to that.