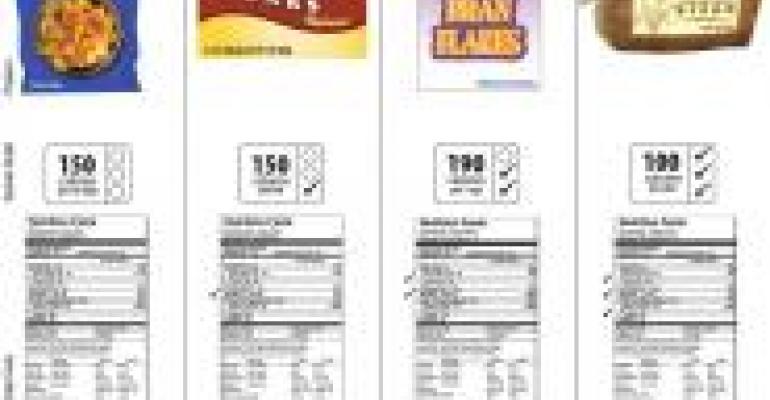 Want to know what a potential, government-sanctioned front-of-pack nutrition label might look like? Take a look at left. The mock-up was released as part of a much-anticipated report by the 11 members of the very official-sounding “Committee on Examination of Front-of-Package Nutrition Rating Systems and Symbols (Phase II).”

The group worked for months as part of the Institute of Medicine, an independent entity formed within the National Academy of Sciences that advises policymakers on health issues. Matthew Krueter, a professor at Washington University in St. Louis, and one of the committee members, compares the system to the Energy Star certification program for appliances. The main benefit: It’s simple.

“We reviewed 20 or more front-of-pack labeling systems in our work, and that’s the challenge that’s facing consumers,” he told me by phone. “The systems vary quite a bit, and that makes it harder and confusing for consumers.”

The end result: a label that specifies calorie count, and adds an icon (star, check, dot, etc.) based on the amount of saturated and trans fats, added sugar and sodium in the serving.

“We think it’s a simple system,” said Krueter. “For a consumer, all they have to know is more is better. The more checks or stars that a food has the healthier it is.”

Replacing all the other systems with a single, government-approved program is sure to raise objections from various stakeholders in the food industry — retailers and manufacturers — who’ve already invested heavily in one plan or another.

But there’s room on larger labels for two “nutrients to encourage,” such as vitamin levels or calcium. The creators say these nutrients are just as important for consumers to know about. GMA's response can be read here.

“It goes directly against the GMA and FMI rating plan, which I consider to be an end run around FDA regulation, as if the FDA doesn’t exist,” she told me. She reviewed a draft of the report, available here, via her blog.

The report has left the more protective, objective world of science and has been turned over to the sponsoring agency. It's going to have to be well-fortified if it's to withstand the tests awaiting it in the world of politics.