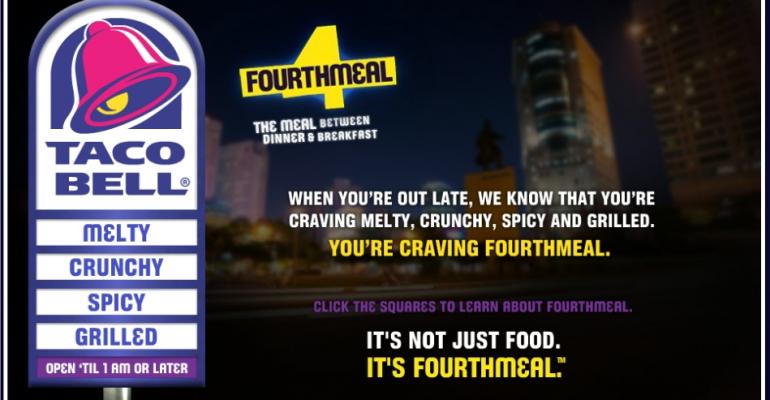 “Three squares a day” is the old adage that described how we used to eat, three meals spaced pretty evenly throughout the day. Breakfast, lunch and dinner are the clocks by which our hunger knows the time.

The rise of snacking, changes in lifestyles and family structure and the rise of technology have all conspired to create an additional eating occasion, known as the fourth meal.

“The fourth meal is the period from after midnight to about 4 a.m. where there’s an enormous amount of eating going on,” says Harvey Hartman, chairman and CEO of the Hartman Group, the Bellevue, Wash.-based consulting firm

Hartman stopped into our offices for a video shoot and the question came up as we discussed how America’s growing snacking culture has changed the way we eat, and — for retailers — how food is packaged and sold. 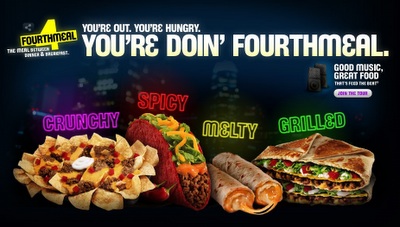 The concept was popularized by the Denny’s restaurant chain, with its 24-hour breakfast menu, and quickly picked up by Taco Bell (see ad at right), the quick-service venue that has always played up its reputation as a favorite destination during the after-party hours.

Given the hour, one would suspect that the items consumed during nighttime eating are anything but healthful, full of empty carbs and high levels of fats, regardless of whether it’s eaten inside the home watching the late movie or out in a restaurant.

Indeed, it’s hard to imagine someone munching on carrot sticks or even veggie chips at a time like this (primarily due to the mental state of the consumer during this time period). This is a time better suited to cold pizza, ice cream and those irresistible syrup-smothered, pancake-rolled sausage links known as pigs in a blanket.

When I searched “fourth meal” on the internet I came across a blog written by a doctor. His post on the topic included a list of recommendations to avoid the midnight hunger pangs:

• Breakfast within 60 minutes of waking up.

• 8 or more grams of protein with every meal and snack.

These are all solid suggestions and a Call to Action for healthy food manufacturers. It’s tough enough making healthful foods sexy during the daytime hours, but the food industry can’t stop. In this era of obesity, there’s another meal waiting to be fixed.