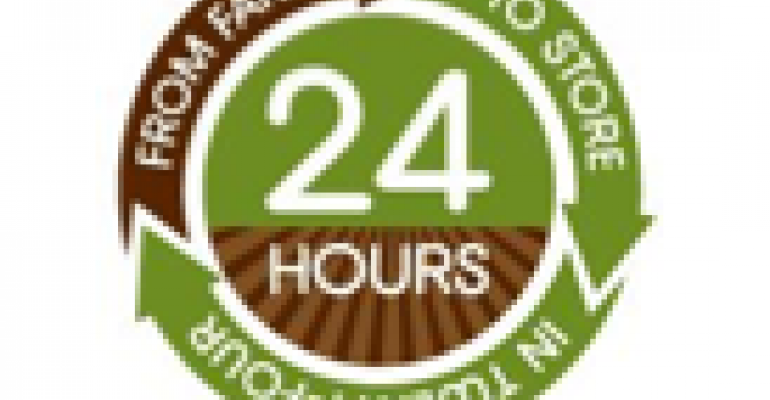 Fresh & Easy Does More With 24

Sourcing local is a challenge, and selling it is no picnic either. So hats off to Fresh & Easy’s ambitious “Farm to Store in 24” program, which guarantees local produce will be on shelves less than a day after it leaves the farm. The Tesco-owned supermarket chain, which operates 150 stores out west, says the program has been a resounding success — so successful, in fact, that they’re going to expand it.

As much as 65% of Fresh & Easy’s seasonal produce comes from California farms, and that percentage is set to increase as the retailer takes on more growers. This isn’t as simple as going out and shaking hands with a few farmers and telling them the truck will be by next week, however. It’s a collaborative effort, full of the eventualities that come with seasonal growing. Both parties have to do their fair share towards meeting that tight deadline.

“Getting produce from the farm to the store in 24 hours or less is an incredibly tricky task, which makes it important to partner with strong local growers who share our commitment to quality produce,” said Justin Hill, Fresh & Easy’s produce manager, in a statement.

The end result is worth all the effort. This summer’s lineup includes table grapes from the Coachella Valley and strawberries from farmers in Ventura County and Watsonville, on land overlooking the Pacific Ocean. Fresh & Easy is also focusing on sourcing plums, peaches, nectarines and other stone fruits grown in California.

It’s details like these that make a local program work. And it’s a lot of work, no doubt, but what retailers are finding is that they’re giving shoppers something rare and very valuable: peace of mind. Concerns about personal health, food safety and the environment abound these days, and sometimes the answer to it all is to simply know where your food comes from.