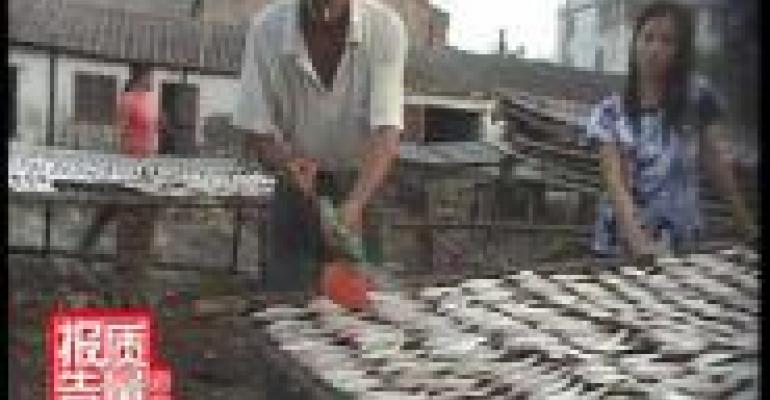 I received this image from a friend who knows I write about food and food policy. It's a still taken from an undercover documentary on food safety practices that recently aired (according to my friend, a China native) in the country.

The still depicts a young man smoking a cigarette and spraying fish, lying atop a wooden table, with.... something from a handheld pump. According to my source, the documentarian stated the substance was a pesticide, apparently applied to keep flies and other disease-carrying insects off the fish.

Right now, we've got Codex on one side, the USDA/FDA on another and even more alphabet soup in between. Yet, we continue to run around putting out fires as countries with no standards send tainted product out from their shores. Look at melamine. It's the second time in less than two years that unscrupulous Chinese suppliers have been called out on their over- and illegal use of this toxic additive, which they are using to cut everything from pet food to milk.

I don't want to harp on China here. This behavior can occur in any country that's been jolted by the arrival of global commerce — and the money to be made in exports. China just happens to be the biggest player. But therein lies my point. It's time for the United States and the European Union (and any other country with a regulated food industry) to put their heads together and establish a truly worldwide set of food safety and food production standards, from the farm on up. Heck, everyone just got together to save the world economy. Why can't we do it with other issues?

After seeing this photo, I know right where to start.