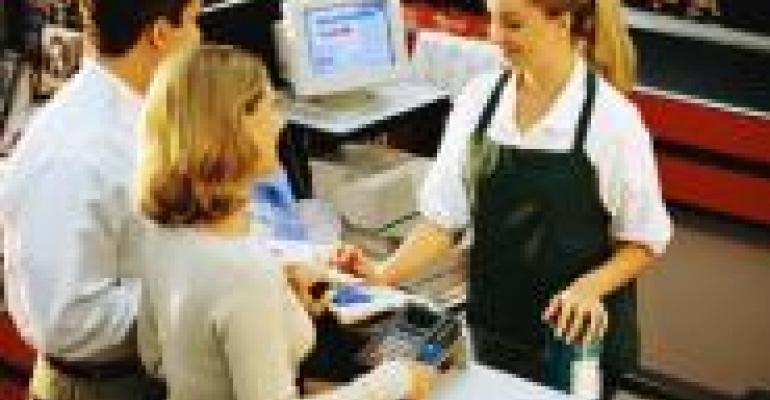 A Healthier Way to Check Out

Retailers have made headlines lately for agreeing to place their stores in food deserts, but there’s another area void of healthy foods that might also be worth colonizing — and it’s inside their very own stores.

I’m talking about that haven of unhealthy impulse buys, the checkout lane.

Hy-Vee, the Midwest supermarket chain that stakes its name to health and nutrition, is the company to watch here. Earlier this year the retailer piloted a healthy checkout aisle in a single Minnesota store as part of a promotion with the AARP/Blue Zone Vitality Project. The aisle, which stocks fresh fruit and bottled of water where candy and soda would normally go, was a surprise hit with shoppers, and now the company is in the process of expanding the concept to more than 100 stores across its eight-state region.

As my colleague Julie Gallagher reports, the lanes aren’t add-ons but rather retrofits of existing checkout stations. Once completed, they feature milk, bottled water, baked chips, nuts, fruit and other better-for-you items.

I’m sure all of this sounds absurd to store owners used to making money off little indulgences and the sugary treats that kids pester their parents for. But such thinking is way past its expiration date. Packaged snacks, especially those marketed to kids, have seen an uptick in better-for-you offerings, and fruits and vegetables have gotten edgy makeovers from companies like Bolthouse Farms. A recent study from the NPD Group shows that fruit is the top snack for kids under 6 years old.

Parents are the key demographic here. Just as the “pester factor” is crucial to candy sales in regular checkout aisles, its absence is what makes the healthy checkout lanes attractive to moms and dads, according to the Hy-Vee dietitian interviewed. They aim for the lanes because they know their kids won’t bug them for a banana or a carton of milk, then buy those very items for their healthy appeal.

By taking the concept from a one-off promotion to nearly half of its stores, Hy-Vee is giving healthy checkout lanes a big vote of confidence. It’ll be an uphill battle, however, and competitors may be hesitant to follow suit. Manufacturers have contracts with retailers that stipulate space at checkout, and upending those would be a hassle, not to mention expensive given the loss in income from slotting fees. There’s also the brutal fact that, despite the momentum behind healthy snacks and their potential at checkout, most people still reach for the candy bars and cheese puffs before they’re rung up.

Still, it’s an interesting experiment and one that Hy-Vee is uniquely positioned to execute.