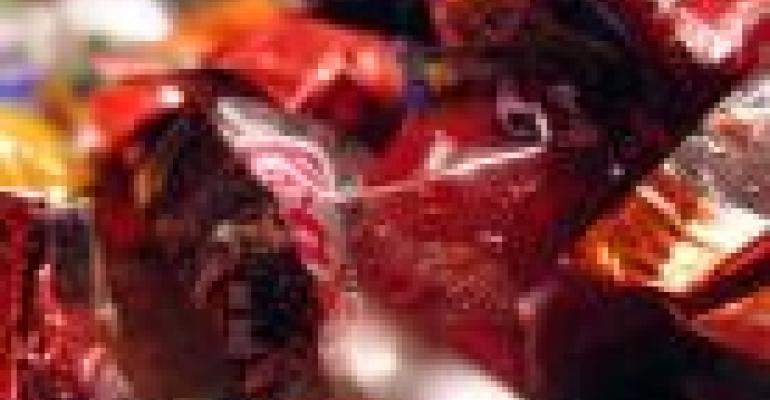 Being the sweets freak that I am (dessert is the only reason dinner gets eaten), what I wouldn't do to be in Chicago right now, where it’s Day Two of the All Candy Expo.

All candy! I would dance down the aisles like Homer in the Land of Chocolate episode of The Simpsons.

The National Confectioners Association, which puts on the show, notes that sales of candy and snacks have remained strong through the past year, despite a tough economy. The industry posted a 3.7% gain for the 52-week period ending April 19, 2009. Candy, chocolate and gum continued to lead the category in sales and ranked third in food sales overall.

There was enough of a wellness component to highlight here. Dark chocolate sales increased by 12% (premium chocolate in general did very well, rising 28%, the fourth year of double-digit growth for the category). Sugar-free gum was a winner with a 10% sales increase for the last 52 weeks, while licorice sales grew 7%.

More stats: In 2008, some 3,345 new candy products debuted, while 3,121 snacks, cookies and cracker items were introduced. The products themselves all might not be healthy, but sales sure are robust.

For the coming year, there is plenty of choice for the wellness-minded consumer. Well, at least enough to rationalize buying some candy. Take for instance Jelly Belly, which is introducing two new super fruit flavors — Barbados Cherry and Acai — to their new Superfruit Mix, which also includes pomegranate, blueberry and cranberry flavors.

Too much of a stretch? Then how about Reese's Dark Chocolate Peanut Butter Cups from Hershey’s, or Russell Stover Sugar Free Snack Bars made with granola?... Of course, we could go in the opposite direction, and talk about “lesser evil” options. Instead of actually scarfing down a plate of maple-flavored bacon, let’s settle for a lollipop with the same flavor from a company called Das Lolli. It’s called Man Bait. But forget the name — in this case, the candy is probably much more healthful than the actual product.

Still not convinced? Then check out this recipe for Dark Chocolate & Bacon Cupcakes.

I rest my case.