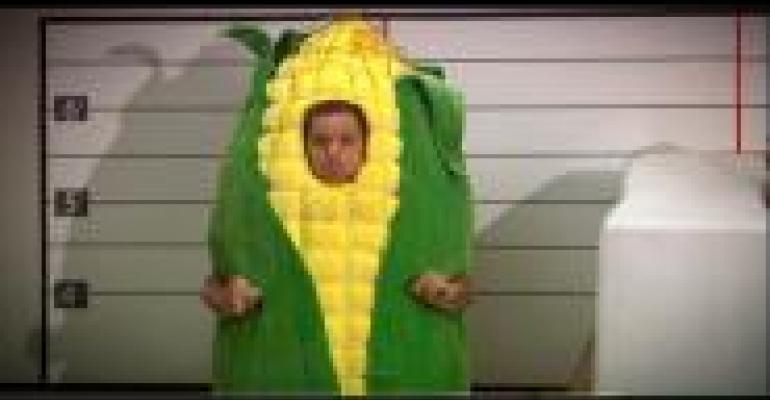 Don’t count high fructose corn syrup out just yet. Stevia is not going to take over the sweetener world, as many have been predicting. In fact, the Center for Consumer Freedom launched a new ad campaign this week that stresses the similarities between HFCS and sugar.

“The myth that high fructose corn syrup is somehow a greater contributor to obesity than cane sugar, beet sugar, or honey has been soundly debunked by nutritional experts, but HFCS is still widely misunderstood by the public,” said Sarah Longwell, the spokesperson for the campaign.

Print ads appeared this week, and television spots will soon follow (shown at right). In these, actors dressed as an ear of corn, a sugar cube and a honey bear standing in a police line-up play up the “wrongly accused” theme, as the “victim” in the commercial is unable to identify the sweetener responsible for making him gain weight because all three sugars are nutritionally the same.

The television commercial will air on MSNBC, Fox News, CNN and CNBC and will run for three weeks, according to CCF officials.

Certainly, the HFCS folks have some valid points. The new sweeteners coming to market have taken full advantage of the backlash against the current generation of sweeteners, and none is bigger than high fructose corn syrup.

I’ll admit that I don’t like the stuff, but then, I don’t like any sweetener. I don’t drink soda, take my ice tea straight and was freaked out the day several years ago when I finally got around to reading the ingredients on my loaf of bread (it was a long line a check-out and I was too far from the magazine display) and saw that HFCS was listed fourth.

I began noticing it everywhere, from cold cereal to canned tomato paste. And that is the true villain here. It’s not that HFCS is bad, but the food industry, in trying to make processed foods more exciting and palatable, and less expensive to make, turned to HFCS as a cure-all, putting it into everything, helped along by government agricultural policies that encouraged production and flooded the market with this stuff.

I don’t know what good the campaign will do. The image problem is compounded by the fact that HFCS is highly commoditized, while new-generation sweeteners like stevia are branded. The consumer knows they can ask for them by name. I don’t expect they’ll do the same for an ingredient that’s never been available in a tabletop retail package, and likely never will be.