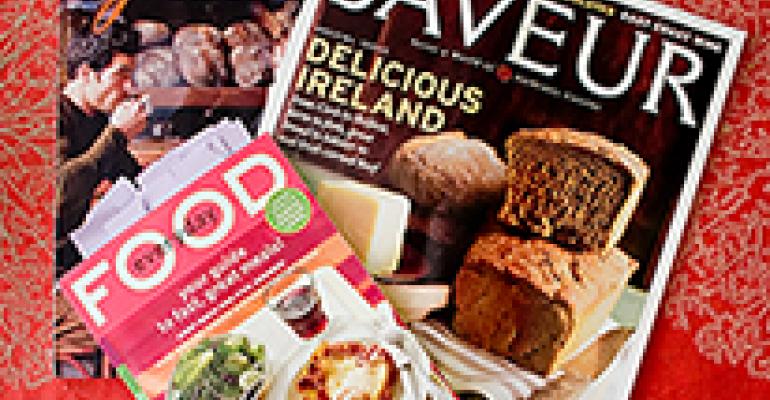 Hot (and Delicious) Off the Press

Further proving that more and more people are cooking and eating at home in this down (and downright scary) economy, today's edition of The Wall Street Journal reports that magazine racks are getting an extra helping of food titles:

There will be 336 such magazines published this year, nearly a third more than in 2003, according to the National Directory of Magazines. Many of those titles have shown brisk circulation growth.

That’s an impressive — some would say extremely bold — increase, especially when you consider that ad pages in the magazine industry have fallen 7.4% overall. Well-known titles like Gourmet and Cooking Light have seen double-digit percentage decreases.

According to the article, the new magazines are banking on people’s growing desire to save money and get in touch with the Rachel Ray or the Emeril Lagasse within. That’s good news for supermarkets, which of course sell pretty much everything readers will need. Stores can also carry these new titles — like Food Network Magazine or Sandra Lee’s Semi-Homemade — on their magazine racks, and perhaps incorporate them into nifty cross promotions, depending on the recipes inside.

The most important point to note, however, is the influence these publications have over consumer attitudes, especially when it comes to health and wellness. No longer in line with the Julia Child school of cooking, magazine editors are focusing on healthy dishes and cranking out green-themed issues. They’re also, like us, writing about the news, trends and politics behind the food industry.

Let's hope retailers and other magazine vendors make room at the display rack for these new titles. Certainly, promoting the benefits of home cooking, and meals eaten together at home, can be just as rewarding as the healthful ingredients listed in all those recipes.