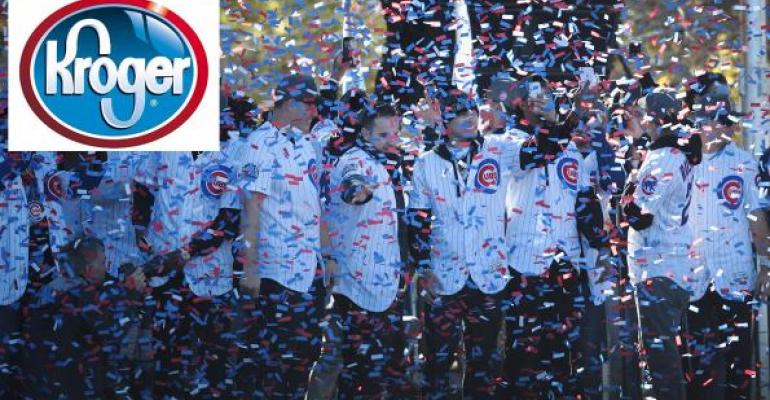 How Kroger and the Cubs won it all This post is the inaugural 10 Items or Less blog.

Kroger CEO Rodney McMullen is fond of using baseball analogies to describe the business world, and on the morning of the seventh and final game of the World Series last week, he warmed up attendees of its annual investor conference by asking them to identify their rooting interest, Cubs or Indians.

As we know now the Cubs prevailed in a ramshackle but thrilling finale that some baseball analysts are hailing not only as a triumph over 108 years of Northside futility but of debate over the value of advanced analytics in service of winning baseball: The Cubs’ data-driven decisions in assembling and deploying their talent, Rany Jazayerli writes, was a critical difference maker in ending a championship drought that a myopic baseball world might previously have ascribed to dubious goblins like a “curse” (the Billy Goat in Chicago, or Babe Ruth in Boston).

The turnaround required Cubs fans to demonstrate more of their famous patience — it took Cubs president Theo Epstein exactly five years from Day 1 to a World Championship — but such is the cost for clubs like Chicago that were slow to awake to baseball’s quantitative revolution.

McMullen would no doubt agree. Kroger didn’t drop many news bombs at the event this year, but instead, again and again, highlighted how the retailer’s belief in, and adherence to, its proprietary data was guiding its own path to victory. That message was driven home further by the meeting’s setting: Rather than present for Wall Street in New York, Kroger did so at the offices of 84.51, the retailer’s analytics firm. Kroger’s longstanding edge over competitors in the food world, in fact, can be traced directly back to a decision to embrace and act on its customer data in the early 1990s. It took Kroger some time, too. Not coincidentally, that was the same moment when pioneers in practicing such tactics in baseball — the Oakland Athletics as chronicled in Michael Lewis’ bestseller Moneyball — were the exceptions and not the rule.

And as the Cubs celebrated a World title, leadership of Kroger’s hometown Cincinnati Reds passed from Walt Jocketty, whose perspectives were rooted in baseball’s “old school” scouting world, to an assistant 20 years his junior, former investment banker Dick Williams. Williams has boasted to “put the Reds analytics department up against anybody,” as he embarks on a plan to bring a World Series to Cincinnati for the first time since 1990.

The Reds, who lost 94 games and finished 35½ games behind their National League Central Division-winning Cubs this season, have a ways to go, but a model franchise to learn from is only down the street.

Welcome to the first installment of "10 Items of Less" - a weekly blog which will reflect upon the news and events impacting food retailing and food retailers. I've been covering retail and consumer businesses for about 20 years, including the last 13 here at SN with an emphasis on financial results and "big picture" strategies.

This is an especially interesting time to be in this line of work. As resilient as the American supermarket is, its as though its checklane belt never stops bringing more packages to process at the register, and they all have a price. Ruthlessly efficient German operators! Unprecedented deflation! Amazon! Millennials! Think of me as the harried cashier who’ll scan and bag these matters, weigh and price the questions, with a little bit of insight, maybe some speculation and predictions. But I'll keep it tight and moving: 10 or less at a time.