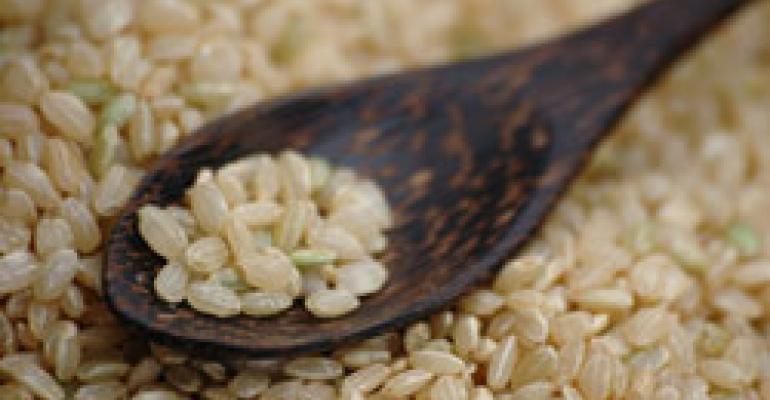 In the consumer mind, brown rice equals health. Vegetarians have long made those meaty, nutty grains a staple of their diet. Not only is brown rice full of nutrients like antioxidants and anthocyanins, it has more than 12 vitamins and minerals.

If there's any deficiency in brown rice, it's that it has a below-average amount of fiber (hard to believe when you're chewing — and chewing — a mouthful of the stuff. But alas, true). For this one shortcoming, brown rice could not display the Food and Drug Administration's whole grain health claim — it failed to reach the fiber threshold.

Well, no more. This past week, the FDA relaxed the fiber content requirement, and now brown rice can make the whole grain claim: "Diets rich in whole grain foods and other plant foods and low in total fat, saturated fat and cholesterol may reduce the risk of heart disease and some cancers."

After the crash of the low-carb diet craze in 2004, consumers starved of carbohydrates intuitively began seeking out whole grains, which had been taboo under the diet plan. Pasta and bread were back on the shopping list, and so was brown rice. According to the USA Rice Federation, sales increased almost 20% in 2004 and have been climbing steadily since then. It's nice to see that the FDA has caught up with consumer thinking, which — more often than not — turns out to be right.

Let's just make sure we have enough rice on hand to sell. And please, everyone: No hoarding.