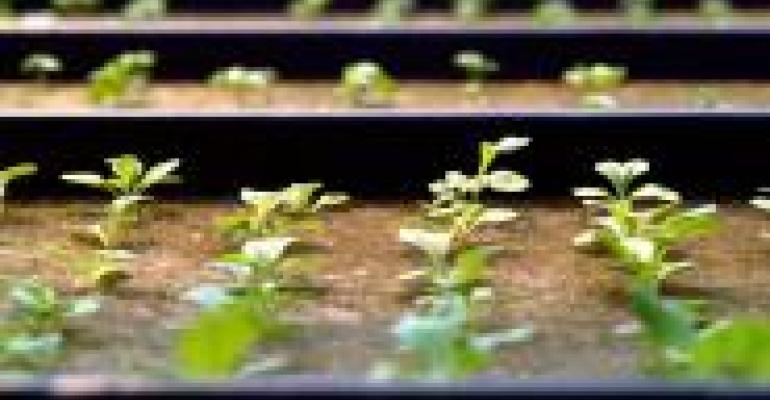 Some terms, like “organic,” are well-understood and regulated. Others, like “natural,” are not. Defining natural is largely up to the manufacturer or retailer. As such, it goes without saying that one person’s natural is another person’s synthetic.

So it is with “local.” Is it defined as food sourced from a single state? A 500-mile radius? A market area? I’ve heard all three interpretations used.

Perhaps the ongoing grey borders that gives meaning to the concept of local is the primary engine powering the rise of hyper-local or ultra-local produce. No confusion here (at least not yet). The current vision includes roof top gardens and rows of hydroponically-grown herbs stretched along the windows right inside your local supermarket.

There are companies like BrightFarms LLC and Sky Vegetables, which offer supermarket retailers the opportunity to grow select produce items on top of stores or distribution centers. There’s Big Box Farms, a new start-up that’s promoting a pair of proprietary systems — the Farm Rack and the Farm Hand — that allow retailers to package and sell leafy greens under private label within 24 hours of harvesting.

A number of retailers are doing their own farming, either on a rooftop (such as the stainless steel steel troughs atop the Bi-Right supermarket in San Francisco) or on their own farms (Woodlands Market, also in California). Nothing is stopping retailers from making a statement on defining local in their own way. It’s not really about volume or output. Operating a farm means understanding the value of perception and making a statement about freshness and quality.

Entire communities are also getting involved as a way to resurrect civil pride and to provide some much-needed relief in food deserts. One of the speakers at the upcoming Natural Products Expo East show in Baltimore is John Fetterman, aka the mayor of rust. Fetterman has been mayor of Braddock — the poorest town in Pennsylvania — since 2003. Instead of bemoaning his community’s condition, he and others created an organic garden in the shadow of an abandoned steel mill. The harvest is distributed to local residents as well as restaurants in the Pittsburgh area.

I interviewed Paul Lightfoot, the CEO of BrightFarms, for a print story that appeared in the most recent issue of our SN supplement, SN Whole Health.The possibility of leveraging a rooftop for income, along with satisfying a corporate responsibility goal, is likely to prove irresistible to any number of retailers, of all sizes.

“We break down the benefits into three categories: Better food, better business and better environment,” he told me.

Will consumers take to hyper local produce? Sure, especially if they can see it growing as they walk into the store, or pass the farm on their way into or out of the parking lot. It’s a definition they can visually comprehend. The idea seems to have reached a critical mass. If the concept takes off, the definition of local will finally get some true boundaries.