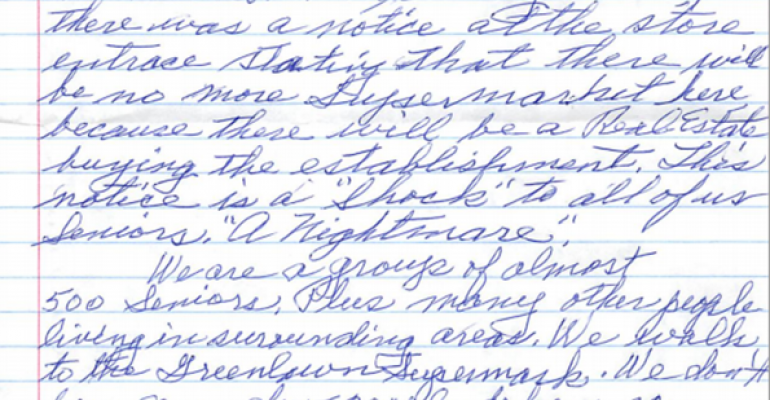 Mary Luzetski is 93 years old. She lives in a retirement rental community in Greenlawn, N.Y., known as Paumanack Village, which opened in 1980 as a pioneering result of citizen advocacy for affordable senior housing on Long Island. 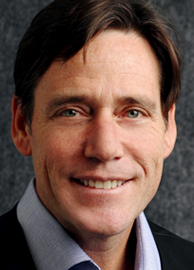 The development, which today houses 500 residents aged 62 and older paying federally subsidized rents for modest, low-slung, one- or two-bedroom apartments, is considered by many as a model development for senior living. In well-to-do Suffolk County, the waiting list for an apartment at Paumanack Village can be several years long.

The facility may not have built at all were it not for a concurrent development alongside the property — a neighborhood shopping center anchored by a Waldbaums. The store is close enough for Paumanack residents to walk to; it’s where Mary Luzetski does virtually all of her food shopping.

Today, Mary literally doesn’t know where her next meal is coming from. The 35-year-old store, one of 300 being sold off by its bankrupt operator, A&P, was picked up at auction earlier this month by an entity known as Shanghai Enterprises. A note on the door at the store informed Mary the store would close shortly because a real estate company was taking it over.

I called the store and asked the woman who answered if she knew who Shanghai Enterprises was and what its plans for the store were. “We have no idea,” she said. She’s worked for the Greenlawn Waldbaums for 12 years but that looks likely to be coming to an end as well. 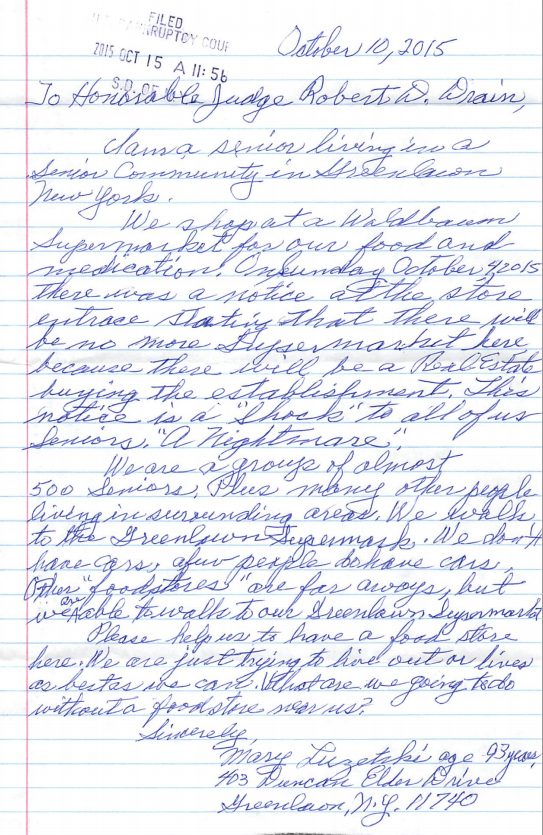 A neighbor, a reporter, and a worker: We’re all stymied by how A&P is dismantling itself after deciding it couldn’t make it as a retailer any longer.

I too have a personal interest in this story. I grew up only a mile or so from Paumanack Village, and as a teenager delivered the New York Daily News by bicycle to the residents there. As paper routes go it was a great job: With doors densely connected off a single ring road, I could deliver 50 papers in a half-hour, and on Saturdays, when I’d “collect” I could always count on making a little extra running errands for the residents — shoveling snow off the walk, taking out the garbage, and often, running to the Waldbaums. (Mr. Murphy often sent me to the liquor store with a note — a scheme that worked only too well — but that is another story entirely.)

I’ve written about supermarkets for a long time but rarely have I come across one more valued and relied on by its local community than the one I knew in Greenlawn.

In a handwritten letter filed with U.S Bankruptcy Court this week, Mary Luzetski reminded me that was still true.

“Please help us to have a food store here,” Mary pleaded in the letter, addressed to Judge Robert B. Drain. “We are just trying to live out our lives as best as we can. What are we going to do without a food store near us?”

I hope she subscribes to the Daily News.