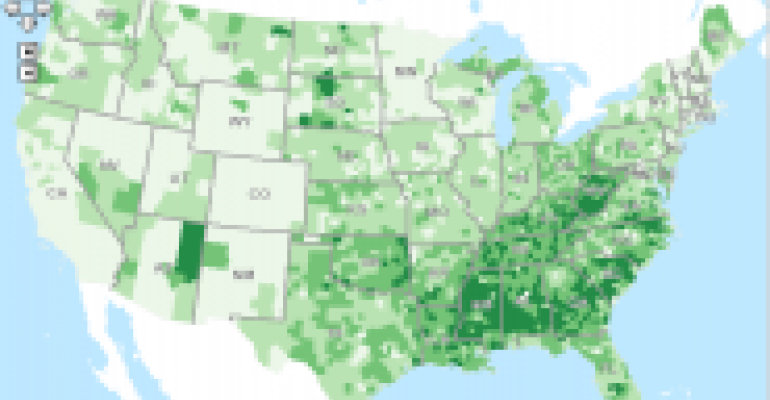 With so many different apps and gadgets springing up around the supermarket industry, it’s only appropriate that we get this, an interactive map detailing just about anything you’d care to know about food availability, our eating habits, and how depressingly obese we’ve become.

It’s called Your Food Environment Atlas, and it’s courtesy of the U.S. Department of Agriculture as part of the Obama administration’s drive to get Americans — and especially kids — eating healthier. Earlier this month Michelle Obama launched Let’s Move, a nationwide effort to increase availability of healthful foods for kids, and to get them exercising more. The administration also announced it plans to spend $400 million to help eliminate food deserts.

The new food atlas is incredibly detailed, and that makes it a fun, useful tool for consumers and food industry insiders alike. Go ahead, play around with it for a while. Want to know what U.S. county eats the most pounds of fruits and vegetables? How about the regions with the highest density of fast food restaurants? I was interested to see the distribution of farms that sell directly to consumers.

Other than being a diversion when things get slow at work, the USDA’s atlas is a definitive guide in the drive to make America healthier. That might sound overblown, but information is power, and this much information can go a long way. The food industry has stated time and again its commitment to helping people lead healthy lives. Well, now they have a good idea of what they’re up against.