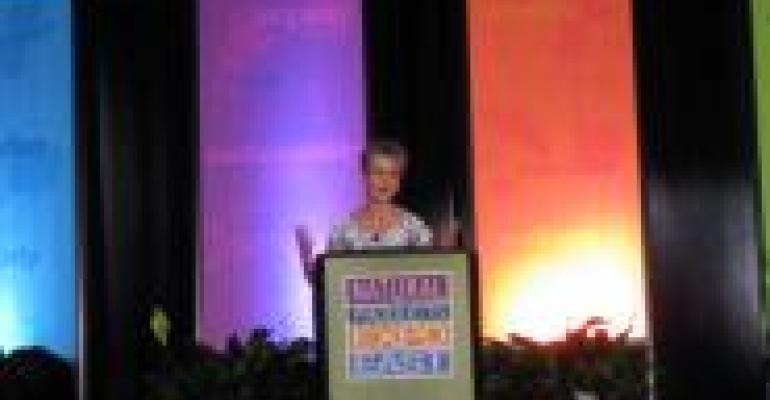 Know the name? Like Rachel Carson, I'm sure it rings a bell in your head, even if you can't pinpoint why. Lappe wrote the landmark bestseller Diet for a Small Planet, a book that, like Carson's Silent Spring, opened the eyes of a young generation in the 1960s and helped shaped the subsequent movement.

It's been more than 30 years since the author penned her thoughts on the food shortages afflicting the world at that time. Her great insight was that our modern-day production processes actually generated scarcity. She found out that it took 16 pounds of wheat and grains to produce a single pound of finished meat. No wonder why people were starving.

Lappe's observations are just as valid today as the day more than 30 years ago when she experienced her epiphany in the library of UC Berkeley where she was a student. Yet, Lappe's remarks this morning projected an insistent optimism, a spiritual call-to-arms that change is still possible. It was refreshing to think there's still time. Referring to the current economic, political and ecological environment in which we're living, Lappe showed us all opportunity.

"In this moment of dissonance, we can see things we couldn't see before," she told the audience. "It's far too late, and the situation much too bad, to feel pessimism."

Lappe outlined a bold plan she called the Ecology of Democracy, a way of sharing and re-directing resources that realigns ourselves and our collective activities with "the natural flow" of the world.

"We can shed these disempowering messages in order to take steps to develop a bold humility," she continued.

Heady stuff, but far from ethereal. Look at the sustainable measures companies and consumers are taking. Sure, we're in the stumbling, early stages, and there's still plenty of sham. But whether you're a corporate mogul, a small food manufacturer, a single-store retailer... or a reporter, you can't walk away from hearing Frances Moore Lappe without thinking that "this profoundly discombobulating time" - as she put it - is not to be feared, but to be embraced. It's the world giving all of us yet one more chance to get things right.