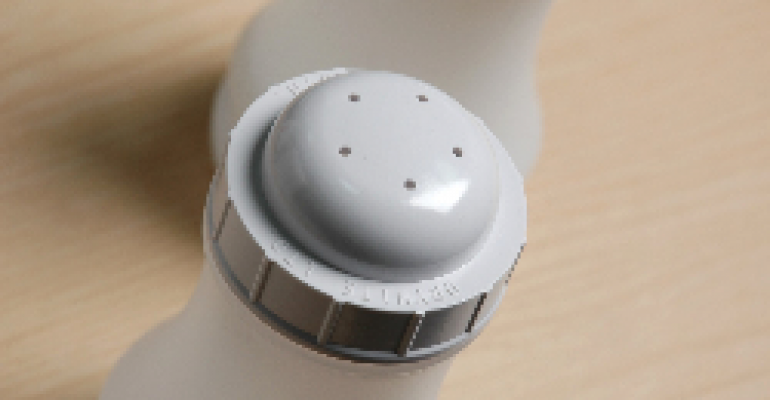 In what the tabloids might call an “A-Salt,” or perhaps a “Shakedown,” several cities in England have begun dispensing new five-hole saltshakers to area restaurants in the hopes of reducing people’s sodium consumption. The current widely used model has 17 holes in it, so if you go strictly by the math, patrons could end up shaking out a third of what they normally do.

Officials there certainly think it’s a breakthrough. The Food Standards Agency — a watchdog group established by the government — has nominated the new saltshakers for a “Food Champions Award.”

But does rationing like this really work? Throwing salt on fries (or “chips”, in this case) isn’t an exact science, so people could be just as happy with less. Critics, however, say diners will pour on the salt no matter how many shakes it takes. To draw a parallel with something that’s more familiar to consumers on this side of the pond, look at portion-control products. Over the past couple years, there’s been an explosion of 100-calorie packs in everything from chips to ice cream. These are supposed to put a consumption cap on rich foods, but some sources say they’re actually doing the opposite. A recent study from the Journal of Consumer Research showed people ate 46.1 grams of potato chips from portion-control bags, and only 23.5 from large bags.

Undoubtedly, though, there are those who will stick to the smaller-size regimen. Just like there will always be those who choose fresh produce and low-fat offerings, and those who opt for the candy aisle. Supermarkets shouldn’t force consumers into fewer shakes or smaller portions. Rather, they should continue to offer a variety of healthy products, then let the shopper choose.