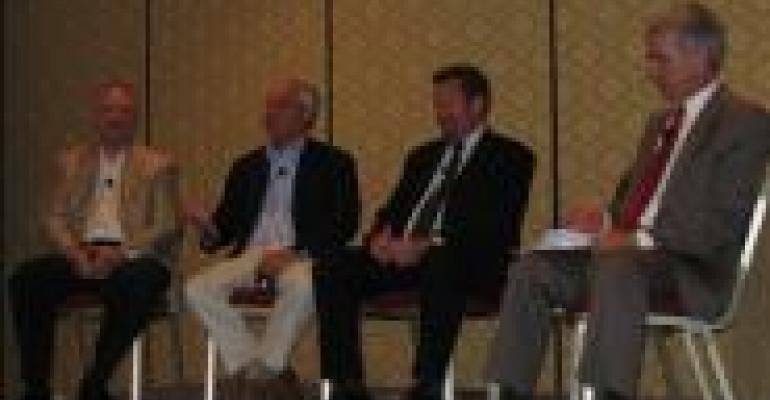 During the past three years, there has been an 80% increase in “farm fresh” claims and farm names on restaurant menus, including “farm fresh,” “farmer’s market,” “farm style,” and “farm grown,” according to recent research by Mintel, presented here at the United Fresh Show 2009 during the “Finding Growth in Today’s Foodservice & Restaurant Sector” presentation. And, the incidence of the words “fresh produce” is up 20% since 2006.

Obviously, when consumers go out to eat, they want the freshest food possible. And including terms like these on menus helps tell a story and enhance their perception of value and quality. The perception of freshness is also a key factor driving the popularity of locally grown foods.

For me, though, the takeaway from this presentation came when panelists Steve Grinstead, president and CEO of Pro*Act; Kevin Ryan, executive director of the International Corporate Chef’s Association; and Gary Schwartz, vice president of supply chain management for P.F. Chang’s China Bistro started discussing these findings.

They noted that chefs are recognizing the momentum of the locally grown movement, and many independent and fine dining restaurants are already promoting local foods on their menus. But, locally grown foods present a logistical nightmare for national restaurant chains. As Schwartz put it, “our chefs love local. Our QA [Quality Assurance] team hates local.” As he noted, it’s very difficult for national chains ensure that every manager or head chef in every one of their restaurants is sourcing and checking local foods properly. And, how would they handle recall situations?

“We don’t see local playing a big role in chain [restaurants],” Ryan said during a question and answer session. “We just can’t do it. Q & A departments won’t allow it. It’s so important for them to check up on the farms that they work with and make sure they’re safe.”