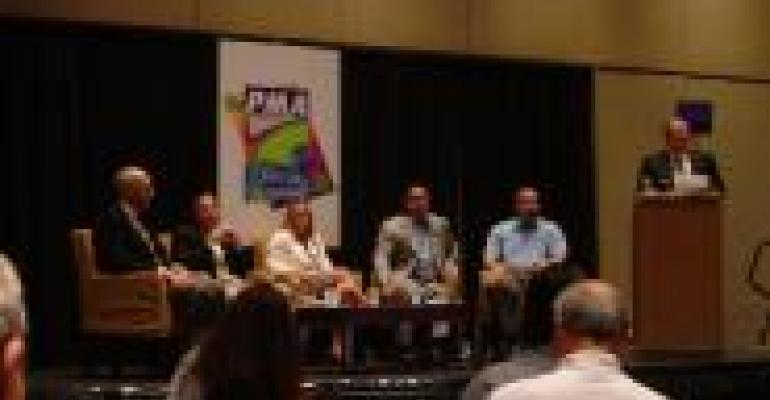 The panel discussed a broad range of issues related to the popularity of local foods and the challenges of local sourcing, but one of the most interesting subjects was local foods and food safety. Corsi pointed out that internal consumer surveys at Wegmans have indicated that shoppers tend to place a significant amount of trust in local growers. They simply believe local foods are safer than commercially produced foods.

Of course, buyers—including Corsi and other supermarket retailers—realize that safety isn’t a given at small farms. Whether a local grower works two acres or two hundred, they still need to be following basic safety protocols.

Corsi said that Wegmans holds all of its growers to high safety standards. If the company is working with a small, local grower, Wegmans’ buyers and store managers make sure that they communicate those standards to those farmers. To help them meet those standards, and ensure that they consistently use Good Agricultural Practices at their farms, Wegmans has been working with land-grant Universities such as Cornell and Rutgers to develop educational programs. To demonstrate Wegmans’ “we’re in this together” attitude toward the process, they offer small growers reimbursements of up to $400 when they complete their first third party safety audit. The assistance from Wegmans’, university agriculture departments and other local farmers makes updating their safety programs a much less intimidating process, and most farmers have are very pleased with the results, Corsi said.

I have personally argued on SN’s editorial page that if the federal government decides to pass new safety and inspection regulations on U.S. farms, that those regulation should be scalable. Small farms can cause food borne illnesses just as easily as large commercial farms. But, small farms don't have the reach to cause a multi-state, national outbreak or a national food scare. Regulations on small farmers should never be so onerous that they’re driven out of business trying to keep up with much larger companies.

But, I’ve been changing my mind lately. The strong trust that consumers have in local growers isn’t misplaced, but shoppers may have unrealistic expectations regarding local foods. And, that trust can easily be broken market by market, small outbreak by small outbreak. All farmers need to employ the best safety practices that they can. Hopefully, consumer demand for local foods will continue to foster programs like those developed by Wegmans, where there’s a true partnership between the grower and the retailer.