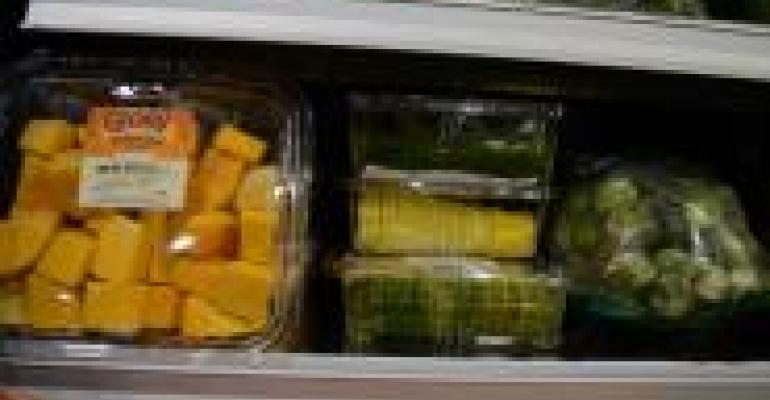 It was amazing to see the variety of packaged fruits and vegetables today in different shapes and sizes. If the price points aren’t too steep, I can see customers embracing these convenience foods even more in the future. Most people I talk to want to eat healthier, but peeling and chopping isn’t always appealing after a long day at work.

I saw quick grab and go items like the packaged sliced summer squash and Melissa’s Produce’s line of vegetables that had been chopped and "marinated" with spices. These items can be directly dumped into a frying pan. A representative from Melissa's said the packaging also extended shelf life.

I spoke with a representative from Mirabel, a grower based in Quebec, who also offered a lettuce product packaged with roots still attached. He said the company has been offering it for years, but it’s been getting more popular. Aside from making a nice centerpiece for a table (see left), the company rep pointed out that the lettuce can last for 20 days, which is 10 days longer than the company’s product without roots.

There were also lots of beautiful varieties of tomatoes. I’ve heard from growers in the past that heirloom varieties have been selling well, and this emphasis on taste in tomatoes could be seen on the floor. Lots of these were packaged as a specialty product, such as the tomatoes pictured on the right from Redsun's artisan line.