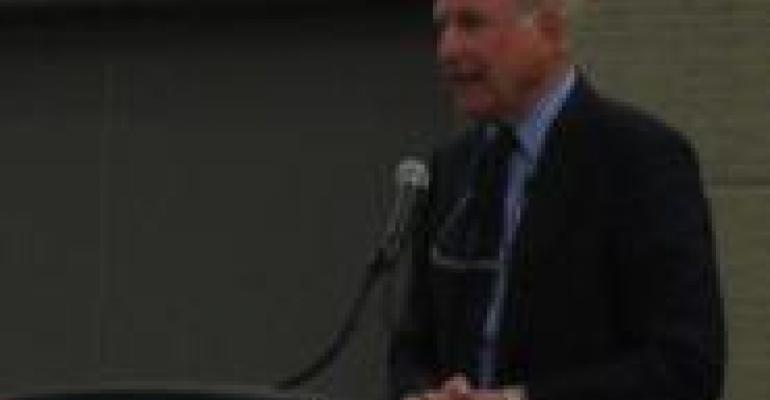 In his keynote address “It Is Time to Make Your Own Rules: a Renegade Guide to Success,” businessman, former M*A*S*H actor, and frequent Fox Business News guest Wayne Rogers didn’t talk as much about seafood or give as many concrete business tips as I’d expected.

Rogers described the difference in perception between traditional business and artists, but said small businesses are a place where those two entities meet.

“I submit that in small businesses, certainly, there is a common denominator. It’s very creative. If you’re an entrepreneur, you’re a creative person,” said Wayne.

He also said that for entrepreneurs experience isn’t as important as asking questions and having the desire to invent, which itself is a creative process.

Wayne’s address, littered with anecdotes and jokes, also talked about federal regulations in relation to small business. “The landscape for us, in small business, to a certain extent has changed.” In his perspective, there are too many regulatory authorities and business regulations, and he gave examples of seafood industry regulations. When he said the agencies and regulations have “good intent” but have been “massively mismanaged,” a few audience members with government titles on their nametags looked at each other and laughed uncomfortably.

Since regulatory agencies overlap, government workers have nothing to do but “make your life miserable,” Wayne said, adding government regulations don’t change the way people do business.

Later when an audience member asked for Wayne’s three most important lessons/practices in business, he listed the importance of honesty, trustworthiness, and responsibility. He also said it's important to ask the right questions/do your homework about your industry.