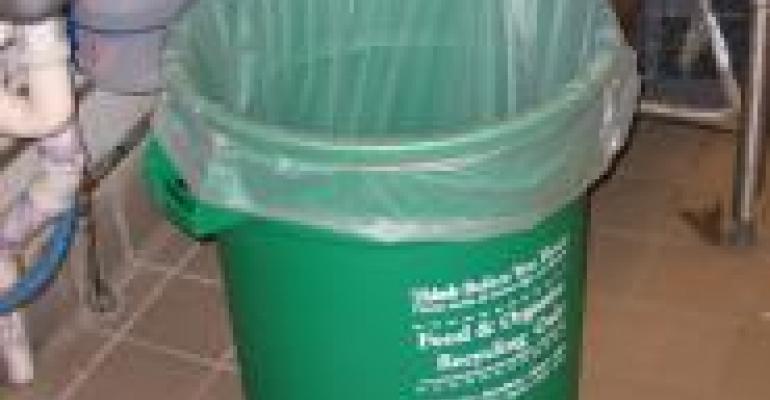 McCaffrey's Market in Princeton, N.J., was really green today. Not only was a bagpiper roaming the aisles in honor of St. Patrick's Day, the three-store retailer launched a unique organic waste recycling program that turns fresh food waste and anything not metal, plastic or glass into all-natural fertilizer.

"We've always been actively involved in anything that benefits the community, and this is really an extension of that belief," Jim McCaffrey, the chain's affable president, told me during a demonstration of how the program works. Indeed, it's truly unique to see how thorough the process is, right down to the large rubber bands used to secure the compost bin liners used in the receptacles.

The receptacles are everywhere, along with posters reminding employees to separate any waste that's recyclable. It required a significant effort to educate everyone in the store, according to Rocco D'Antonio, a principal in Organic Diversion, the firm coordinating the initiative.

"McCaffrey's is an ideal candidate for this type of program because they already have a corporate culture that emphasizes recycling," he said to me as we toured the back room, where an existing cardboard compactor has been joined by a new green waste device. And D'Antonio should know, since he also happens to be business development manager for Penn Jersey Paper Company, which supplies McCaffrey's with all its bags and packaging.

Employee consciousness is important, and is constantly being raised by the store's Green Team, a group of six department managers working with Organic Diversion to train and monitor associate compliance. Several of the team members I spoke to said they volunteered for the responsibility because they already are devoted recyclers at home. "I'm happy to bring this whole idea into the store," said one.

It's the right thing to do, sure. But these days, there are are also very real financial incentives. This one store hopes to reduce its solid waste output by 65% within the next few weeks, so it will reduce its solid waste bill. McCaffrey's will also be a good corporate citizen, since the community will get money back from the state in the form of a recycling grant. But it doesn't stop there: The waste is sent to a local outpost of Boston-based Converted Organics for composting. The material will return to the store 10 days later, all packaged and ready for sale as a bag of Converted Organics fertilizer.