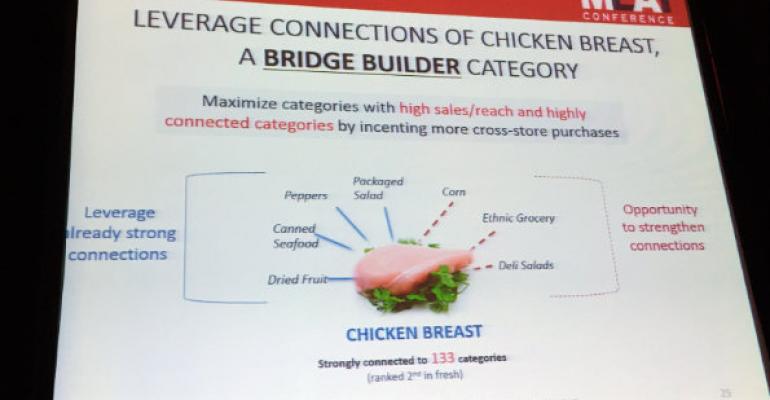 Troubling trends among meat shoppers do not bode well for the department or the rest of the store, Sherry Frey, SVP, Nielsen Perishables Group, said during the session “Winning Customers in a Volatile Price Environment.”

Perishables Group research shows a 5% decline in fresh meat trips in the past year. When consumers do shop the department, they are buying 5% less volume of product. Overall, there was a 1% drop in the number of households purchasing beef, pork and chicken.

“We lost shoppers, we lost consumers, from fresh meat this year,” said Frey.

While consumers continue to switch from higher priced beef and pork to more budget-friendly chicken and processed meats, 97% of the volume loss is due to customers leaving the meat department altogether, said Frey. Many times shoppers are buying deli prepared chicken or deli entrees instead of fresh meat.

“Deli is changing the game and they truly are becoming more of a competitor against foodservice, which is great for the store but is going to be a challenge for you unless you figure out what is it that your consumers are in the store that they're buying and that they want,” said Frey.

She warned that lower meat prices will not be enough to draw consumers back because their tastes have changed. Stores must completely rethink their approach to the department.

One problem is a lack of smaller pack sizes. Retailers may think that consumers who want less meat will ask for it at the service case, but more often they just skip the meat department completely.

“The service case isn't and can't be our only solution,” said Frey.

Retailers also need to consider the total basket rather than merely increasing sales in a specific department or category. “That's not how the customer is shopping the store,” said Frey.

For example, chicken breast is one item that is great for motivating sales in other parts of the store on an everyday basis. It is often found in baskets alongside canned seafood, peppers and packaged salads. Frey said retailers should leverage those connections, as Publix did recently with a promotion for chicken fajitas that included chicken, peppers and the meal idea.

Steak, on the other hand, works well as an occasion-based promotion. Shoppers will often purchase steak alongside specialty cheese and value-added vegetables. Supermarkets can take advantage of those baskets by pushing a combo on a Friday night and placing signs for it at the front of the store.

Frey further suggested that fresh departments like meat could partner with CPG companies on promotions in order to take advantage of their larger ad budgets. The CPG manufacturers are realizing that “as goes meat, so goes the basket” and if people aren't buying meat they also aren't buying items like pasta and canned vegetables.