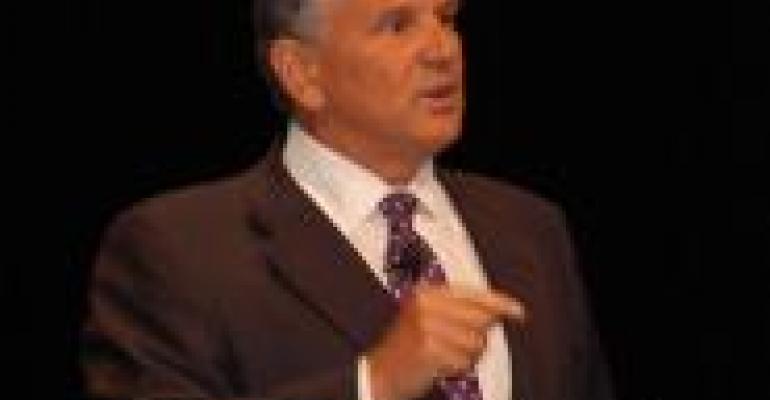 Music Inspires Some at Future Connect

Some attendees said they were inspired by an unusual musical opening presentation at Food Marketing Institute’s Future Connect conference on Tuesday, but others failed to see the connection to their real-world business.

Roger Nierenberg, a music conductor, led off the conference by placing a small orchestra within the audience and performing various demonstrations with them to teach leadership lessons.

“The conductor sees the whole thing — the people in the chairs do not,” he said, noting that leaders have to learn to see the organization from the perspective of the individuals who are part of it.

“Estrangement in a large organization is an inevitable outcome of their size,” he said.

“I thought it was terrific,” said one attendee, although he noted that others in his organization said they did not see the value.

The fact-filled presentation on the direction of retailing on a global scale, covered in a previous blog post, at times “failed to connect with the audience,” said an attendee.

By contrast, attendees were more enthusiastic about Wednesday presentations on leadership by Mike Krzyzewski and Gary Chartrand, the Duke men’s basketball coach and retired CEO of Acosta Sales and Marketing, respectively.

Chartrand related the story about how in 1996 he had just become the chief executive officer, and had a vision to take the company national. Through a series of bold maneuvers that resulted in mergers with other regional sales agencies around the country, Chartrand was able to secure funding and persuade clients to back his vision.

“You have to stay the course when it all seems impossible,” he said.

Chartrand said he foresaw the need for a national sales and marketing agency as he correctly predicted that more and more retailers would merge and create central buying offices for their far-flung chains.

Krzyzewski told of how he sought to give his players “ownership” of the team’s vision when he was coaching the U.S. Olympic team.

He related how he asked all of the players on his 2008 Olympic team to contribute their ideas of what their standards should be, and they worked together to maintain those.