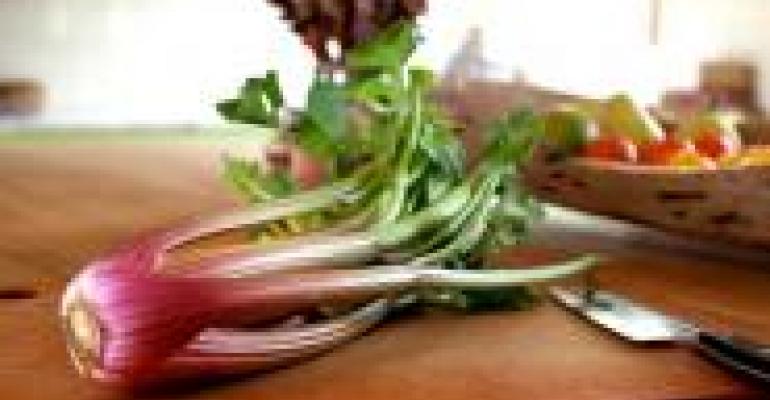 Like any major trade show, PMA offers plenty of opportunities to check out new products that haven’t hit the market yet. In an industry like produce, a lot of the innovation comes in the form of new packaging, new marketing campaigns, or fruit and vegetable varieties that U.S. consumers are simply unfamiliar with.

But, a couple of new items caught my eye at this year’s show. Apio’s Beneforte “Better Broccoli” and Duda’s Red Celery. Both new items were produced after years of selective breeding—in other words, they’re not genetically modified—and both offer new consumer benefits.

The Red Celery, under the brand name “Celery Sensations” is a new variety produced by cross-pollinating regular commercial celery with an old-world heritage celery root that was red in color. Horticulturalist Larry Pierce, Duda’s manager of celery seed research, began working on the project almost 20 years ago. The result is a similar flavor profile with a striking new look.

Similarly, Apio’s Beneforte Better Broccoli was developed after 10 years of cross breeding with a wild broccoli relative native to Southern Italy. Consumers will find the flavor familiar, but this new breed has 2 to 3 times the glucoraphanin as other broccolis. Glucoraphanin is a phytonutrient naturally found in broccoli, that boosts the body’s antioxidant enzyme levels, assisting the performance of vitamins A, C and E.

I’m sure I’m missing lots of new products on this year’s show floor, but these seemed like good examples of how growers can use science and natural cross-breeding to produce new produce varieties with clear customer benefits.