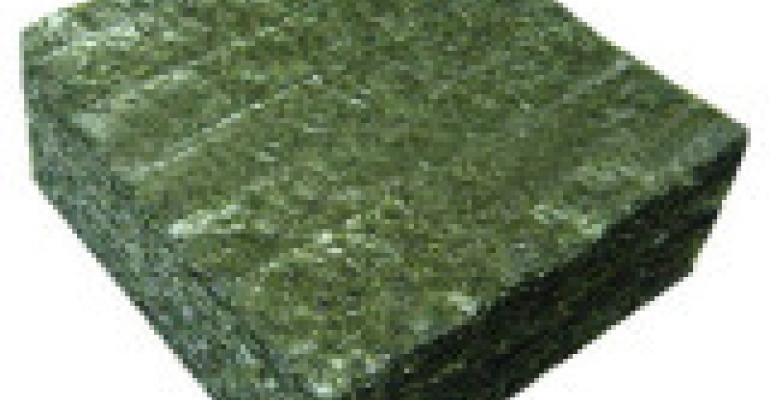 I just returned from a trip to Korea where I learned more than I’ll ever need to know about the cultivation, harvesting and production of Nori, one of the Japanese words for seaweed. In Korea, the word for this product is Kim (or Gim).

Nori has long been a staple in Asian supermarkets, but it’s now crossing over into the mainstream, with several companies starting to distribute Nori in the United States.

So, just what are we talking about? Nori or Kim are thin, dried sheets of seaweed that are used in sushi, rice balls, as a topping for various noodle and other dishes, and eaten as-is as a snack. It can be consumed in its dried “raw” state, but the most popular version is roasted with a little bit of oil (typically a blend of sesame and other vegetable oils) and sea salt.

It is cultivated in the ocean, near the shoreline and typically at the mouth of a river from which the seaweed derives its nutrients. The seaweed spores are typically grown on clam or other mollusk shells in August and September. When the ocean temperature drops below 55°F (13°C ), the seeding begins. The spores are planted on long ropes attached to a floating balloon-like buoy, much like mussel production.

The seed takes approximately 30-45 days to mature and is harvested from November through March. Farmers use special boats that mechanically remove the seaweed from the ropes and deposit it onto the deck, where it is washed with seawater and then fresh water. It is then transferred to drying facilities where the product is washed again and finely minced.

Still with me? Once it’s minced, the seaweed is spread out onto screens which move on hanging conveyors throughout the drying facility for 12 hours to remove the moisture and create the sheets that we typically recognize for use in sushi making.

Nori is sold either raw, roasted in sheets, or chiffonaded as a topping for soba noodles or other Asian dishes. One of the hottest forms that we see flying off store shelves these days is the roasted/oiled/salted product which has become popular for out-of-hand snacking. This form is perfect for lunches and healthy snacking — try it, you’ll be amazed at the flavor!