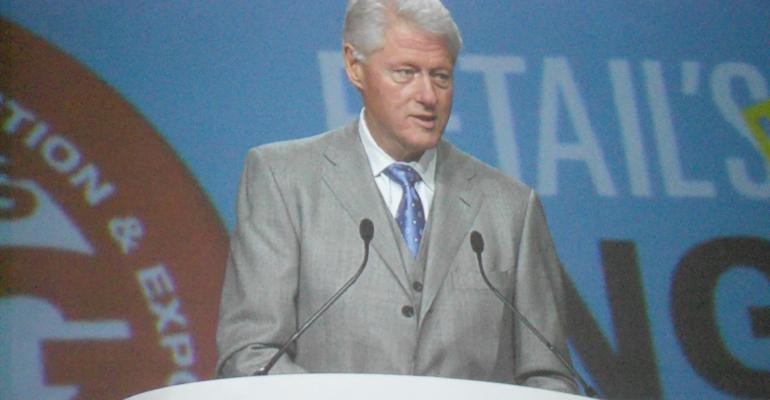 Like many successful people, Bill Clinton got his first job as a teenager in a grocery store. Being Bill Clinton, though, he didn't just land a standard bagging or cashier job; somehow he convinced the store owner to allow him to sell his comic book collection. He made a few hundred dollars and was really proud of himself, though he admitted the same collection would have netted him untold thousands of dollars if he held onto it and sold it today.

The 42nd U.S. president had a lot more to say during his keynote speech at the National Retail Federation's Annual Convention & Expo in New York. Speaking to a packed crowd of perhaps 4,000 in the Javits Center's new North Hall, he touched on the following:

-- He cited Brazil as an example of a highly environmental country, which generates much of its power from hydroelectric systems and uses sugar-based ethanol as its primary gasoline.

-- He said owners of commercial and residential buildings could pay for green improvements by agreeing to pay their current energy prices for a period of time and allowing the cost-savings to be used to pay for the upgrade. Sounds like a great idea for supermarkets.

-- He said the brouhaha over the federal payroll tax may have "broken the fever" that has stymied progress in Washington.

-- He called for the creation of an infrastructure bank funded in part by companies "repatriating" monies invested abroad.

And this is only a sample of what he said (see Mark Hamstra's post for more). The man is still a veritable idea factory, and is making an outstanding contribution to humanity in his post-presidential years.