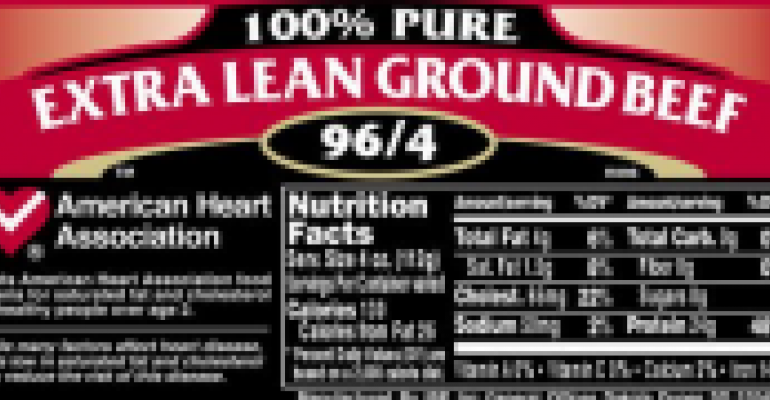 It’s the New Year, and there are countless weight-loss resolutions out there currently being put to the test. While the plans and levels of resolve may vary wildly, one thing that draws many dieters together is their reliance on the Nutrition Facts panel found on product packages.

All grocery items carry the panel, and beginning next year, so will many fresh cuts of meat and poultry. The U.S. Department of Agriculture laid down that ruling last week, announcing that labeling will be required on the 40 most popular cuts, and will include a listing of total fat, saturated fat, cholesterol, calories, calories from fat, sodium, protein and vitamins. The ruling will also require additional context for any products that make lean percentage statements, like “85% lean”.

This may seem like a bummer to some people, the prospect of knowing just how much fat and cholesterol is in that celebratory steak they’re buying. It will be a welcome step for so many people, though, particularly those who count calories and who for so many years have had to fly blindly through the meat department.

The truth may not be that hard to take, actually. For the past couple years the meat industry, backed by recent nutrition studies, has been trying to get ahead of this issue, to let consumers know that red meat is not the devil. Last year the National Cattlemen’s Beef Association ran an advertising campaign highlighting the 29 lean cuts of beef. The group has also worked with retailers in years past on a voluntary nutrition labeling program similar to what’s been mandated by the USDA.

The information cuts both ways, as it should. According to the USDA, a 4-ounce serving of “73% lean” ground beef contains 60% of the daily-recommended amount of saturated fat. Not so hot, but then consider that the same size cut of round roast only has 166 calories.

Given the surprising versatility of those items found in the meat case, it’s not hard to imagine the new directions. Burgers, delicious as they are, could take a backseat marketing-wise to steak salads and pasta dishes with beef or lamb. Rather than cross-merchandising charcoal briquettes and lighter fluid in the summer, why not throw in a barrel of fresh produce and healthful recipe books?