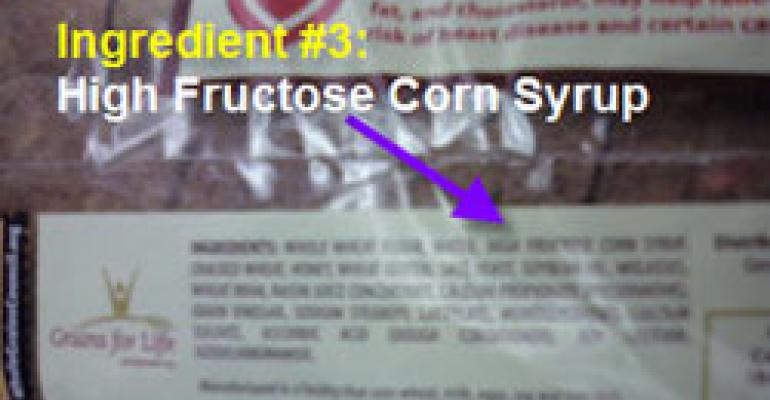 I'll come right out and say it: I hate High Fructose Corn Syrup.

I am not obese or diabetic, and I have all my teeth. So, what's the matter? I hate HFCS because it's in packaged bread! Week after week in the supermarket, I read the labels of all the whole wheat and fiber-rich breads on the shelf, and every one of them lists HFCS as an ingredient. I have to go to a specialty store to get honest-to-goodness whole wheat bread that doesn't have HFCS and won't rip and ball up into a wad of moist dough whenever I try to smear peanut butter on it.

The Grocery Manufacturers Association just issued a science policy paper on high fructose corn syrup that summarized findings from a number of sources. One could guess that the effort comes in response the news earlier this year that the U.S. Food and Drug Administration does not consider the sweetener a natural ingredient based on its current policy regarding the term "natural."

One contribution is from a scientific review panel convened by the University of Maryland. Experts there conducted a review of available literature, added some original analysis, and concluded that "HFCS does not appear to contribute to overweight and obesity any different than any other energy sources."

In other words, HFCS is not, in and of itself, creating fat Americans. The GMA report noted that the key to addressing obesity health problems is to "continue to emphasize that consumers should burn more calories through physical activity, than they consume from the foods and beverages they eat."

No argument there, but there's one line of questioning the report neglected to follow: CPG companies are the biggest, most consistent users of HFCS on the planet. It's cheap, plentiful and makes manufacturing foods a lot easier. And so, it goes into more and more products, and the American palette adjusts to higher levels of sweetness... until we get to the point where we don't mind it in our bread.

Sure, we need to take responsibility for our diets and eat the right foods, in the proper amounts, as suggested by the Dietary Guidelines for Americans. But until this substance is highlighted and pointed out on packaging, American consumers can't take all the blame.