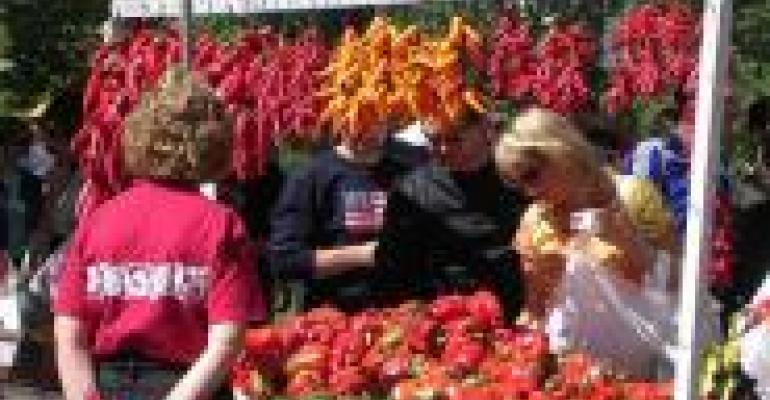 Our Kind of Census

The U.S. Census is almost wrapped up and the counting will soon begin in earnest. The U.S. Department of Agriculture is doing its own counting in 2010, but the constituents are a bit different. Instead of canvassing neighborhoods, the USDA is counting farmer’s markets.

The results will become part of an annual catalogue that's a revealing snapshot of America's love affair with fresh food — and provides supermarkets a valuable inside look at how this competing format is performing.

"For the future of sound farmer market policies, it is critical to make the USDA National Farmers Market Directory as accurate as possible,” said Rayne Pegg, administrator for the agency’s Agricultural Marketing Service, said in a promotional statement. “USDA can't do it alone, and we ask for assistance in compiling this directory.”

The government has been tracking farmer’s markets since 1994, and at last count, there were nearly 5,000 of them operating all around the country. As any retailer will tell you, these venues are tough to compete with. Nothing satisfies the current consumer desire to connect with their sources of food like a farmer’s market, where farmers themselves bring their own product to sell, directly to the consumer.

Some regions are more fortunate in that milder winters allow them to host more markets, year-round. And that, in turn, creates the need for more farms (or so it would seem). That’s what the state of Washington's Office of Farmland Preservation found in a recent survey of farms. That census, detailed in the Seattle Times, found that the number of farms in Washington increased 6% between 2000 and 2008 — with growth accelerating during the past two years. What’s more, 90% of the farms were owned by families.

Many of those tilling the soil feel farmer’s markets and similar outlets, like Community-Supported Agriculture and — yes — selling direct to supermarkets, have improved their chances at success.

"I basically felt like there was a ready market," Siri Erickson-Brown, co-owner of Local Roots, a farm in Carnation, Wash., told the , adding that farms her size "aren't finding it too hard to sell what we grow."

So, given the all the different kinds of produce-selling options available to consumers, you have to wonder if a supermarket that hosts farmers, either in their stores or their parking lots on a regular basis, would qualify for the USDA census. Let’s hope that’s the case, because no matter how many farmer’s markets or CSA’s there are, most consumers still buy their fruits and vegetables at the modern supermarket. That’s got to be worth something.