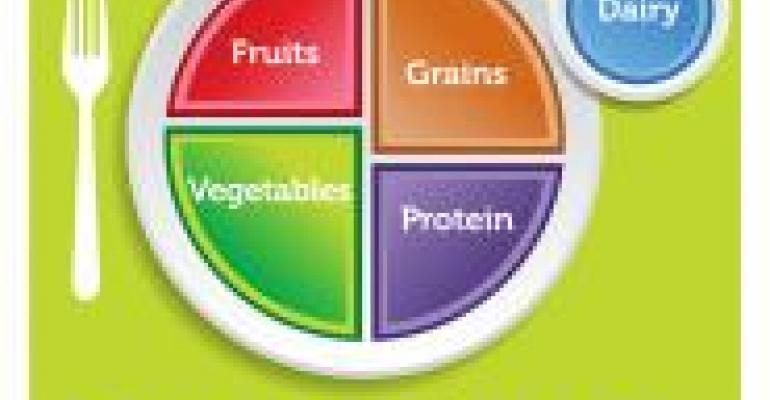 The Plate Has Arrived

The food pyramid is no more. In its place, the U.S. Department of Agriculture today unveiled a colorful plate design that splits food choices into five different categories.

From the first glance, the new MyPlate icon is easier to understand than its predecessor. Whereas the pyramid split its recommendations into confusing “servings” and didn’t clearly prioritize the various food groups (do I eat more of the top or the bottom?), MyPlate divides its recommendations the same way any civilized person divides a meal. Fruits and vegetables take up half of the plate, with grains and protein taking up the other half. Dairy is represented as the beverage selection off to the side.

Given how simple it is, it’s hard to believe all the hoopla leading up to the MyPlate release. It’s understandable, though, if you think about how the concept of nutrition is evolving in this country. Simple put, eating well doesn’t have to be complicated. Consumers are opting for less-processed foods. Manufacturers are removing ingredients like sodium and high-fructose corn syrup from their products. Earlier this year the USDA, for the first time ever, released dietary guidelines recommending that people eat less.

The MyPlate program continues this theme while also offering a comprehensive educational component. The program's website breaks down each section of the plate and also offers programs that allow consumers to analyze their current diets and design new plans going forward. The site also offers tips that go beyond the plate, like switching to skim or 1% milk, and trying to eat fruits and vegetables in season.

MyPlate has its detractors. Marion Nestle thinks it’s “better than the pyramid but that’s not saying a lot.” Others contend that the design is too simplistic, and that the concept of a plate isn’t all that new, since organizations like the American Diabetes Association have been using it. Still others argue that the problem isn’t awareness of these various food groups and how much of each to consume — it’s price and availability.

A final verdict will come with time. As a parting shot, though, I’ll point to one group that could be well served by the new design: children. I was in elementary school when the first food pyramid came out, and I can remember being completely baffled by it. The new MyPlate design, on the other hand, is colorful and easy to understand, and I think it has the potential to reach the young consumers that desperately need a healthy start.